A total of 115 people including 9 minors have been arrested in the case so far, said the Palghar Police on May 1.

On Thursday, a political battle appeared to brew over the death of an advocate. Digvijay Trivedi, a lawyer from Mira Bhayandar, died on the spot in a car accident on Mumbai-Ahmedabad national highway at Manor on Wednesday morning.

The death kick-started a controversy, with the BJP claiming it to be a conspiracy. The saffron party tried to corner the ruling Maha Vikas Aghadi (MVA) government over the death of advocate Digvijay Trivedi.

Notably, Trivedi was in his vehicle along with a female colleague, who has sustained serious injuries. The duo were accompanying the legal team, which was heading to the court, which was likely to hear the bail applications filed by many of the 115 accused, arrested in the Palghar lynching case.

BJP leaders Sambit Patra and Priti Gandhi also claimed that Trivedi was a lawyer appointed by VHP in the case.

Patra took to Twitter and said that the news of Digvijay Trivedi dying in the road accident was disturbing. He further questioned the Congress party and added, "Is it a mere coincidence that those who raised the Palghar case were either attacked by Congress workers or got FIRs? Well, this is a matter of investigation!" BJP Mahila Morcha's National Incharge of Social Media Priti Gandhi said that the mystery is Palghar case was getting deeper. She wrote, "Lawyer appointed by VHP on behalf of the deceased Hindu Sadhus in Palghar - Digvijay Trivedi has been killed in a road accident. This mystery is only getting deeper. Maharashtra Govt should immediately hand over the case to CBI. They have miserably failed!" 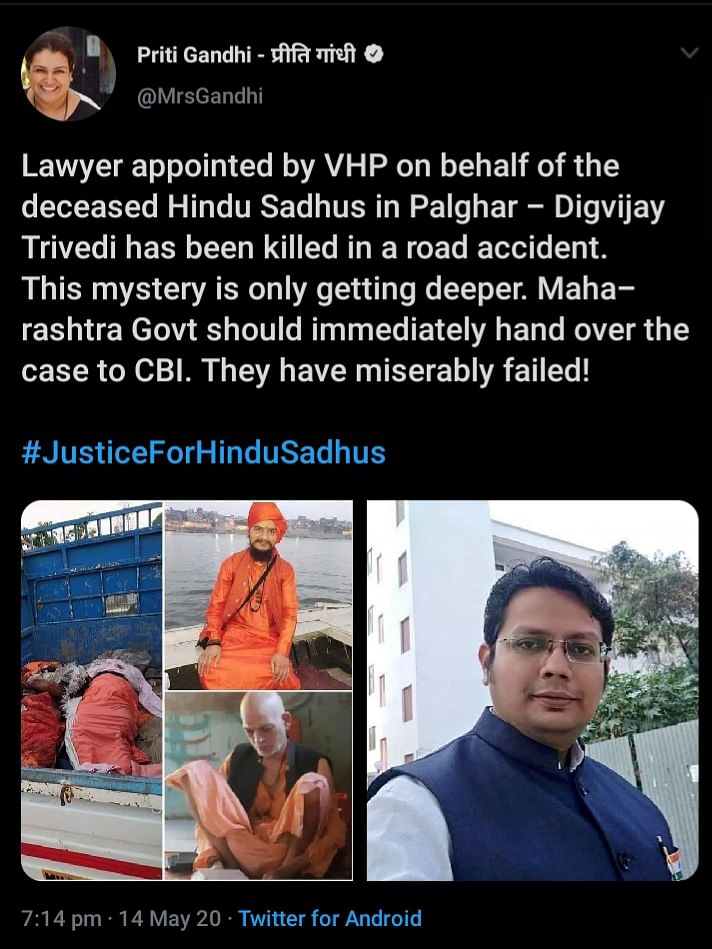 Meanwhile, Shriraj Nair, official spokesperson of VHP has denied any link with Trivedi. Nair told The Free Press Journal that Trivedi wasn't the official lawyer appointed and that their only demand was for a CBI probe.

"He wasn't related to the Palghar case. He was only coming along in case any assistance was required," Nair said. "I also heard in the news that he was linked to VHP, but he wasn't," he added.

Further, advocate Anil Kumar Upadhyay, who is the "on record" counsel appearing before the lower court in the lynching case, trashed the "conspiracy theory".

Upadhyay told FPJ, "It is a sad news that he died. But I think that it should be clarified that he was not linked with the lynching case at all. He had nothing to do with the case and was only accompanying us, in his own vehicle."

According to Upadhyay, he was in a separate vehicle and Trivedi was driving his own car. "It would be wrong to give this case a colour of conspiracy. If there was any conspiracy as such, then why would someone kill a person, who is not related to the case at all," said Upadhyay.

Upadhyay even rejected BJP's claim that the VHP is involved in the case.

"I would like to clarify, the VHP has no role before the lower court. I am appearing for the Akhada Parishad from Haridwar, who are seeking justice for the deceased Sadhus. There's no point in giving this case a conspiracy angle," Upadhyay further clarified.

What is the Palghar sadhus' mob-lynching case?

Three people, two of whom were sadhus, were travelling in a car to attend a funeral in Surat amid the COVID-19 lockdown when they were attacked and killed by a mob in Gadchinchile village in Palghar on the night of April 16, allegedly in the presence of a police team.

The victims were identified as Chikne Maharaj Kalpavrukshagiri (70), Sushil Giri Maharaj (35) and the driver Nilesh Telgade (30).

Following the incident, a total of 115 people including 9 minors have been arrested in the case so far, said the Palghar Police on May 1.

(With inputs from Narsi Beniwal) 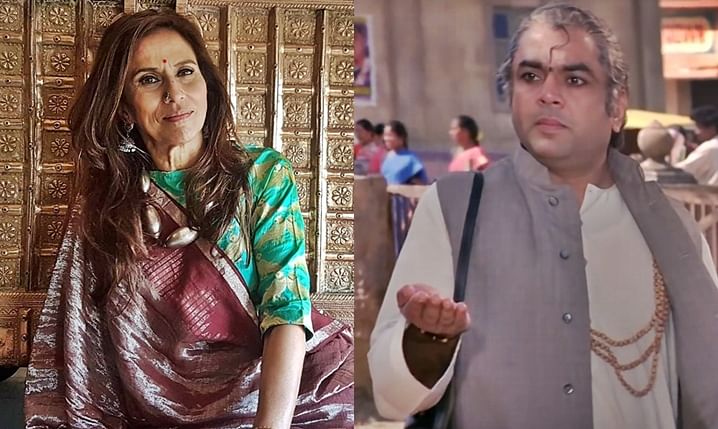