ON CAMERA: Nashik car crashes into 3 vehicles, takes dramatic turn after cops recover bag of alleged fake currency in it

The police found the bag full of currency of face value Rs 2000 and Rs 500; the total value of the same is not known yet.

Days after three vehicles had bunched in front of Satpur police station in the city, another such incident has come to the fore. A speeding car hit three vehicles near Untwadi in Ambad police station limits on Wednesday, December 28 and the cops recovered a bag of alleged fake currency notes from one of the vehicles.

According to reports in local media, the police found the bag full of currency of face value Rs 2000 and Rs 500; the total value of the same is not known yet.

Reportedly, a speeding car hit 2-3 two-wheelers around 11.30 pm on Wednesday on Untwadi road in Nashik. Following the accident, the Ambad police seized the car and arrested the driver. 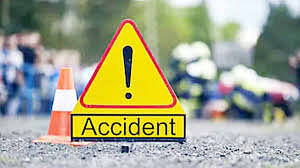 The car was taken to the police station and during a search of the vehicle, the cops found counterfeit curreny in the car. According to the Maharashtra times report, it is yet to be ascertained wether the currency is fake.

The police did not divulge details on the case; a probe in the matter is underway, they told media.

In the accident, a motorist was injured severely and is currently under treatment.

Mumbai crime branch arrested a person with counterfeit currency amounting to Rs 80 lakhs. The arrested accused named Bhushan Patil (31) was held by the police after they received a tip-off about him possessing fake currency.

The cops have registered a case against Bhushan, a suspected accused, in Powai Police Station for possession of fake notes and trying to circulate them.

The accused, according to reports, was produced before the court and has been remanded to police custody till January 4.