At 24.8 degrees celsius, the financial capital recorded the second-lowest maximum temperatures for the month in a decade.
Dipti Singh The India Meteorological Department (IMD) has advised fishermen not to venture along and off the south Maharashtra-Goa coast.

Officials said that the unseasonal rains are expected to continue on Thursday and moderate showers will continue over the weekend.

Mumbai's Santacruz observatory had recorded 42mm rainfall in 12 hours ending at 8.30pm on Wednesday, while the Colaba observatory recorded 43 mm in the same period. This also led to a significant dip in the maximum temperature (by 9 per cent ) recorded in the city.

According to the IMD, the unseasonal weather is expected to continue on Thursday as well. ‘‘Yes, the rain will continue till the weekend; however, the intensity will decrease starting Thursday,’’ predicted Rajesh Kapadia, of Vagaries of Weather, a popular private weather blog.

Meanwhile, Shubhangi Bhute, scientist, IMD Mumbai, said, ‘‘The rain that that city is witnessing is owing to a cyclonic circulation over the south-east Arabian Sea and adjoining Lakshadweep area which now lies over south-east and adjoining east-central Arabian Sea. A warning for fishermen has also been issued as we expect rains/thunderstorms to continue for Palghar, Thane, Raigad and parts of Mumbai till Thursday.’’

‘‘At present, a western disturbance is lying as an upper air system in the mid and the higher tropospheric levels. This system is interacting with the cyclonic circulation, which is over the northeast Arabian Sea and adjoining the Gujarat region. Along with this, a low-pressure area is expected to form over the east-central Arabian Sea. A trough is also running along the Maharashtra coast in the lower levels,’’ stated experts from Skymet Weather, a private weather agency. 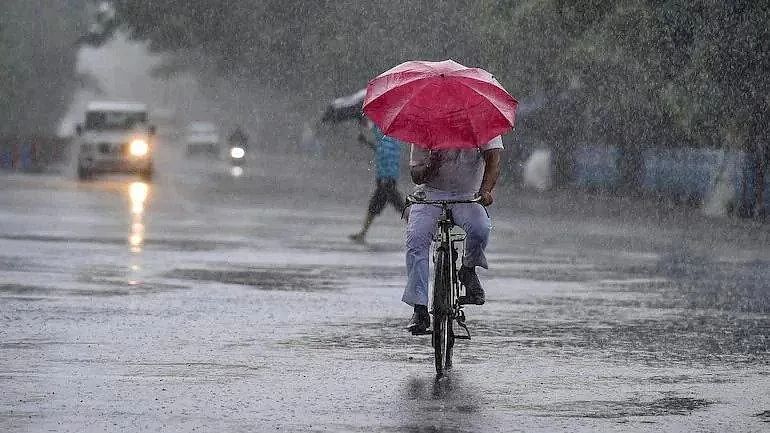