Critics have however raised concerns about the high number of weapons-trained youth unemployed after completion of four years of the Agnipath scheme.

The Union Cabinet cleared a proposal to 46,000 recruits “Agniveers” this year in the Armed Forces enrolled in Army, Navy and Airforce for a tenure of four years.

The new transformative reforms hailed as the “Agnipath” scheme for recruitment of youths in the Armed Forces on attractive monthly pay with risk and hardship allowances is aimed to have a younger, fitter and motivated diverse profile of both men and women for facing future challenges. It is envisaged that the average age profile of the Indian Armed forces would come down by about 4-5 years after the implementation of this scheme.

“The first set of Agniveers is all set to enrol in the next six months. The selected youngsters will undergo a basic 16-week training followed by two weeks of sea training. Indian Navy will get equal opportunity for both genders to enrol who meet the eligibility criteria,” explained Vice Admiral Ajendra Singh.

“Ministry of Home Affairs will give priority to to 'Agniveers' who complete four years under 'Agnipath' scheme in the recruitment of Central Armed Police Forces and Assam Rifles. Indian Navy will induct up to 25 per cent of the best Agniveers for regular services after their four years tenure. We would get a ready-trained pool of youngsters who would easily fit in the naval forces,” further added vice-admiral Ajendra Singh.

Critics have however raised concerns about the high number of weapons-trained youth unemployed after completion of four years of the Agnipath scheme. “Imagine the unemployed weapons-trained youngsters taking up arms against the state after completion of the four years tenure. Don't forget the unemployed jawans after retirement at age 35 picked up arms in Punjab and took to terrorism,” cautions Kargil veteran Major Vikram Bakshi.

“It is indicative of a deeper problem in our thinking about the defence of India. More men, especially less trained ones, will not help India win future wars. A technologically sophisticated, better equipped leaner military is what India needs,” avers the retired naval officer Pradeep Singh.

Indian Navy is of the opinion that the youthful profile of the new Agniveer recruits will provide a fresh lease of "Josh' and 'Jazba' whilst at the same time bringing about a transformational shift towards a more tech-savvy force.

Considered a major defence policy reform introduced by the Union Government to usher in a new era in the Human Resource policy of the three Services, comes into immediate effect and will hereafter govern the enrolment for the Armed Forces.

'Seva Nidhi' will be exempt from Income Tax. There shall be no entitlement to gratuity and pensionary benefits to the recruits under the Agnipath scheme making a substantial saving to the annual defence budget. 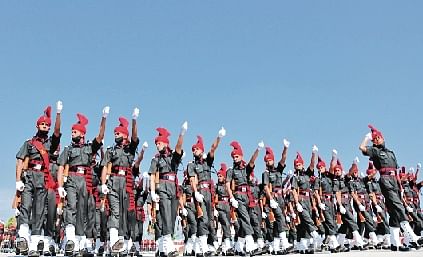