The proposal was approved by a majority vote with Shiv Sena strongly opposing it. Later, it alleged that the BMC and the BJP had cleared the proposal to favour the Metro undertaking.
Staff Reporter 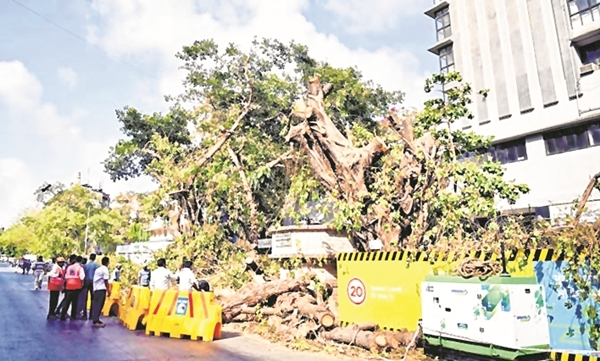 Mumbai: The Tree Authority has approved a proposal to axe 2,238 trees for the construction of Metro 3 car shed in Aarey Colony, Goregaon.

The proposal was approved by a majority vote with Shiv Sena strongly opposing it. Later, it alleged that the BMC and the BJP had cleared the proposal to favour the Metro undertaking.

With that decks have been cleared for chopping of 2,238 trees, which were an obstacle in the construction of the car shed in Aarey colony, but only 469 trees will be replanted.

Incidentally, in the Tree Authority, eight members voted in favour while six were against the felling.

The tree authority comprises 19 members, including the BMC commissioner Praveen Pardeshi. The meeting on Thursday was attended by six members from the Sena, four from the BJP, two from the Congress, five experts and one from the Nationalist Congress Party.

During the vote, two Congress members walked out. One member of the NCP and three experts supported the BJP. The proposal was finally approved by eight votes.

After the proposal was approved, Yashwant Jadhav, the chairman of the BMC’s Standing Committee, told reporters, “We are not averse to development.

But, is it important to undertake development at the cost of trees? The BJP and the administration are working to benefit the private company. There are 27 tribal areas in Aarey. What will happen to them? They depend on trees for their livelihood.”

“On the order of the court, five experts were appointed in the authority. But, they seem to have some economic connection, so they voted in favour. We will challenge the decision in the court. All are trying to destroy the environment of Mumbai.

They had received 80,000 suggestions but the administration did not take them seriously. On the one hand, the government says plant trees, and, on the other hand, trees are being felled,” said Jadhav.