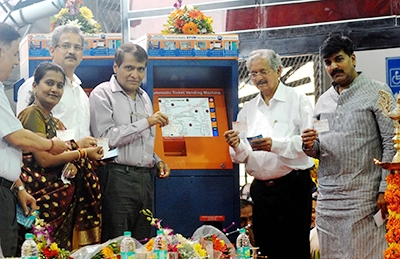 The Indian Railways has stressed on one of the most important provisions before starting the Mumbai locals for those who are fully vaccinated against Covid-19 on August 15: issuing tickets and season passes online. The Central Railway (CR) and Western Railway (WR) will be focusing on mobile ticketing, now that the Maharashtra government has been talking about an application to issue tickets and passes once the necessary criteria is met.

The railway officials said that they saw a considerable demand for mobile ticketing this year in comparison to the past few years. In February, when trains were unlocked for all (albeit with restrictions), passengers were subscribing to the mobile ticketing format. Currently, the UTS Mobile App and ATVMs are not operational. Discussions have begun amongst various departments, namely commercial, operating and security, on the ways to manage passengers from August 15. “Before Covid-19, mobile tickets were sold only 1 per cent to 2 per cent against the various forms of tickets and season passes sold. However, it now constitutes close to 5 per cent till the time trains were available for a larger population in April. Currently, the state government and Municipal Corporation of Greater Mumbai (MCGM) are discussing modalities. We will then get more clarity on the proposed mobile application. We will accordingly see how we can integrate our mobile application with the same,” said a senior railway official on the condition of anonymity.

The Maharashtra government made it clear that passes will be issued via online and offline channels. For the former method, an application will be launched to allow eligible travellers to get monthly train passes on their smartphones. After verification, passengers will be able to download the train passes on their smartphones. For fully vaccinated passengers without a smartphone, photo passes will be available at MCGM ward offices and railway stations.

However, the practical difficulty will lie in verifying those who are fully vaccinated on the application. “It will be difficult for our ticket booking and ticket checking staff to verify it. So, ideally a certificate consisting of a QR Code and photograph of the passenger should be issued, which can be uploaded on the application,” said another railway official.

Earlier, this June, the government initiated a new QR-coded identity card called Universal Travel Pass for local trains, Metro and Monorail. “When people are being issued vaccination certificates, then what is the point of having a new application for the same?” questions Subhash Gupta, president, Rail Yatri Sangh.

The railway authorities claim that they are already operating close to 90 per cent of the services. They will mull over increasing it depending on the footfall. At present, CR operates 1,612 services though it has a capacity of running 1774 services. WR operates 1201 services while it can operate 1367 services.

Currently, as per the official numbers, there are around 25 lakh daily passengers on both CR and WR. However, this touches around 35 lakh people commuting without a ticket and valid ID card on a daily basis. Rail officials expect an addition of 10 lakh more passengers to their official figure after August 15.