The Mumbai Traffic Police said that allegations about the incident were "false," as the Ambulance's siren was wailing due to a "technical defect" and there was no "emergency patient" on board

Ambulance made to wait in traffic as Amit Shah's convoy passes by in Andheri, Mumbai | File

Responding to the criticisms over the viral video showing an ambulance stuck while Union Home Minister Amit Shah’s convoy passed by, the city traffic police on Wednesday clarified that there was no patient inside the van.

The statement came amid censure from netizens who vented their anger for devaluing citizens for “VVIP culture”. Shah was on a twoday visit, starting from Monday, to Mumbai. The video captured the incident which occurred in Andheri on Monday. In their clarification, the traffic police said, “After due enquiry conducted, it has been verified by the traffic official present at the spot that there was no emergency patient in the ambulance and due to defect, the ambulance van driver was unable to switch off the siren. The allegation (of not letting the ambulance pass) is false.”

An on-duty traffic officer placed at the Western Express Highway confirmed to The FPJ that the ambulance was empty at that time and didn't have any emergency call. “We had approached the driver before the VVIP entry began. The driver was not on any call, but because of the defect, the siren was blazing,” said the officer.

Irked over the incident and before the issuance of clarification, a Twitter user had said, “During the movement of the VVIP convoy, an ambulance was asked to wait so that convoy could pass by.” Netizens started sharing and posting comments--while tagging the Mumbai police and the traffic police handles–blaming them for not valuing the lives of the people and patients by favouring the VVIPs.

“Will the Honourable court please take suo-moto action and sack the traffic policeman? Let him choose if he must pamper egos or know what his duty is. Also, penalise Rs 1 lakh to each policemaninthe pilot vehicle of VIP cavalcade,” said another Twitter user.

One more tweet read, “Who is the most VVIPperson? Citizens of India. And not any politician. Any authorityhas no right to stop the ambulance and fire brigade. Citizen's time is more important than any politicians.”

An eye witness wrote on Twitter, "Many are trying to prove that there was no patient. I'm the witness with other mumbaikars. The cop was also trying to convince me that the patient was not serious. Suddenly, no patient?"

Many are trying to prove that there was no patient. I'm the witness with other mumbaikars. The cop was also trying to convince me that the patient was not serious. Suddenly, no patient? #lifematters #mumbai #roadsafety #emergency #ambulance #andheri #Corruption @fpjindia @ndtv

Shah's two-day visit to the city caused chaos on certain roads, making several commuters complain about 'reaching late' due to the travel restrictions imposed by the Mumbai Traffic police.

Commuters, who travel by road, especially in the morning peak hours, reportedly experienced tremendous amounts of problems in reaching their destination.

Amid the traffic woes caused by this VIP movement, a video has gone viral on the social media website Instagram. In the video, an ambulance can be seen stuck in traffic in Andheri's Saki Naka as Amit Shah's convoy passes by. The ambulance was stuck for around 5 to 10 minutes despite the siren blowing out loud .

Shah’s two-day visit to Mumbai began on Sunday. He held meetings with top leaders in the state and also offered prayers at the Lalbaugcha Raja in Parel.

Read Also
Watch: Ambulance made to wait in traffic as Amit Shah's convoy passes by in Mumbai's Andheri 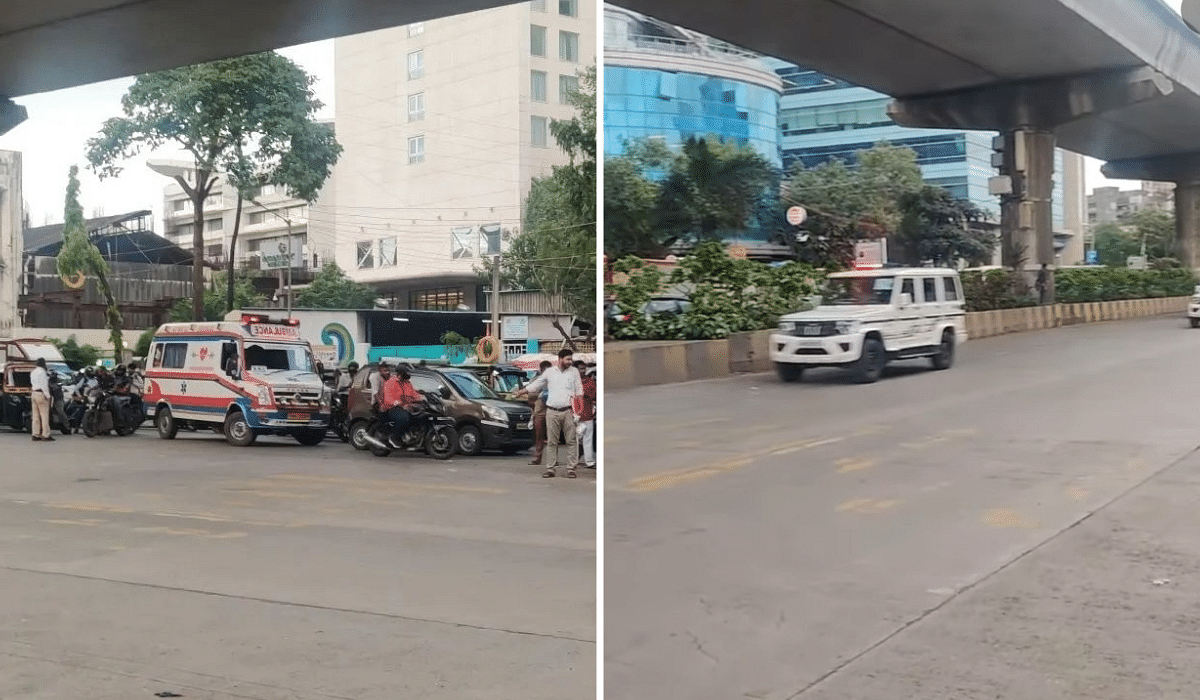