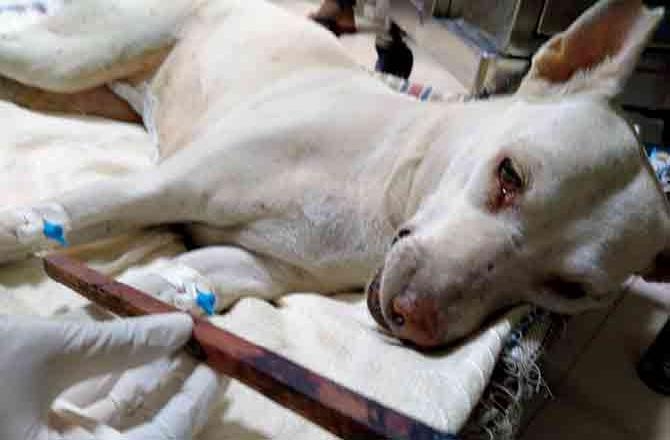 In a brutal and shocking incident, a stray dog's penis was cut-off by one or more unknown miscreants on the night of Dec 25 in Andheri's Kapaswadi area.

The dog was found bleeding by walkers and was taken to Bombay SPCA Veterinary Hospital in Parel where an emergency operation was performed to save the dog’s life.

The honorary animal officer Dr Nandini Kulkarni appointed by the Bombay High Court to oversee animal welfare laws in Maharashtra said, "It is very shocking and unfortunate that the penis of a young street dog was cut by someone. Time of mating in this area. I have asked senior Mumbai police officials and the state livestock department to investigate the matter further."

“As soon as we learned of the injured dog in Kapaswadi (along the new Link Road), we rushed to the site and asked the people who could have committed this heinous crime. Along with another feeder, Hena, the dog was transported to BSPCA, where her condition is not completely safe.” TOI reported saying a local animal feeder, Aban Mistry.

Mitesh Jain, Honorary District Animal Welfare Officer of the Animal Welfare Board of India, commented, “We are asking the local police to check if any clues are available from the CCTV footage on the Andheri website. This is very horrific animal cruelty against a dumb. animal.”

An official application to DN Nagar Police to file an offence under the Prevention of cruelty to animals was given by Deputy Commissioner of Livestock Department and Mumbai District SPCA Member Secretary Dr Shailesh Pethe.

Meanwhile, a few animal rights activists have also written to Maharashtra CM Uddhav Thackeray and have urged him to take serious action and order an investigation into the matter.

They also reiterated that the 1960 PCA law must be amended to apply severe penalties to those who harm animals.