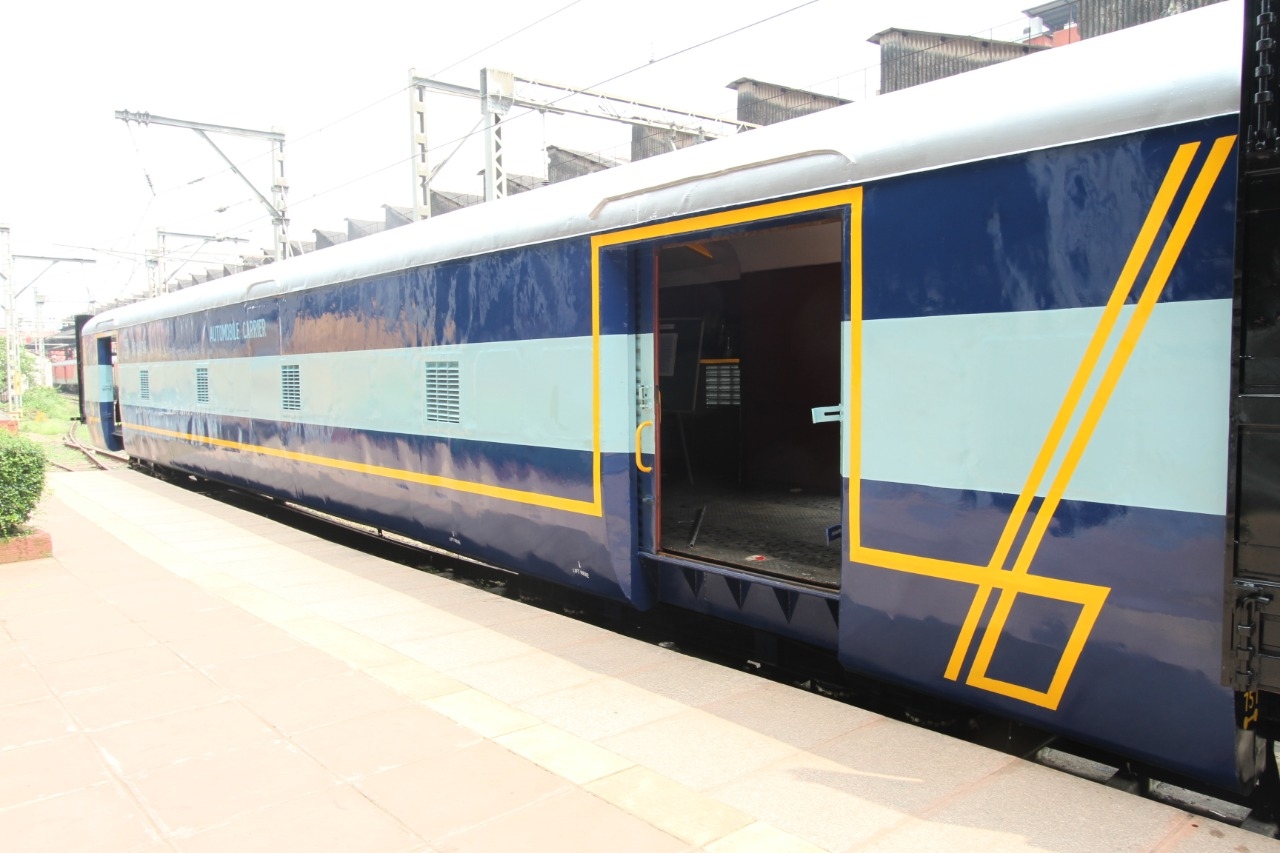 For the first time on Indian Railways, Central Railway has developed a prototype coach with side entry and other improved features for loading automobiles. Last year, Central Railway in co-ordination with RDSO and automobile manufacturers developed High-Speed Automobile Carrier (NMGH), from released & unused passenger coach, with speed potential of 110 kmph and a higher payload of 12 T with improved features like

• Strong floor with a chequered sheet

Further, based on the interaction with the two-wheeler industry and feedback received from Business Development Units (BDUs), Parel workshop in association with RDSO, Lucknow has developed a new design automobile carrier with a side entry (NMGHS) and higher pay load capacity of 18T compared to 12T capacity of an earlier version of NMGH.

A higher payload of 18T with side entry makes it a universal coach which can not only be used for a wide variety of automobiles but also for parcel traffic. This coach is developed in a record time of only 30 days by Parel Workshop in association with RDSO/Lucknow.

The prototype coach was inspected by Shri Anil Kumar Lahoti, General Manager, Central Railway at Chhatrapati Shivaji Maharaj Terminus Mumbai. Shri Anil Kumar Lahoti, General Manager, Central Railway said that NMGHS coach with higher payload and side entry design can prove to be a game-changer in the fast and safe transportation of the wide variety of automobiles and parcel traffic. He also said that during recent years, there has been a quantum jump in automobile traffic on Central Railway. During the year 2019-20, 118 rakes were loaded which increased to 278 rakes in the year 2020-21. During the period from April to October (3.10.2021), Central Railway loaded 200 automobile rakes which are 133% more as compared to the same period last year (86 rakes).

Automobiles are mainly loaded from Chinchwad in the Pune division, Nashik in Bhusaval, Ajni in Nagpur and Kalamboli in Mumbai division. Traditionally, automobiles have been loaded for Fatua, Changsari, Chitpur, Hatia etc. But, recently, new destinations like Farukhabad, Okhala, Kapilas Road etc. have been added. Automobiles have also been exported to Bangladesh from Chinchwad, Ajni & Kalamboli.