HomeMumbaiMumbai: Basilica of Mount Mary in Bandra to go in for repairs

Mumbai: Basilica of Mount Mary in Bandra to go in for repairs

David Cardoz, the supervising architect, said that the heritage church's roof has deteriorated over the last few years and thus they will be comprehensively repairing and restoring the same.

The Basilica of Mount Mary in Bandra that is visited by thousands across faiths durign the Mother Mary's feast held around September every year will be going in for renovation of the roof of its present structure that came up over 100 years ago.

The present structure is the fourth in the series of edifices that were built after a wooden statue of Our Lady, depicted as the Mother of God, was brought by the Jesuits from Portugal in 1570 and placed on the main altar.

Mount Mary website considers it to be the first edifice that was subsequently built into a Chapel before the present structure came up in 1904. We are restoring the roof, says supervising architect

David Cardoz, one of the supervising architects said that they are carrying out only restoration work. Cardoz noted that the wood work has started to deteriorate over the last few years and they have undertaken comprehensive repair work.

"We had put in a proposal for restoration of roofs of Mount Mary and we have undertaken restoration work of the roof. There is no major damage to anything else and we are trying to get it as waterproof as possible," Cardoz said.

He added, "Every year there is a festival [which sees many flocking] and the deteriorating wood work is a concern. For the last few years they [the Church dignitaries] have not been able to do any comprehensive repair work. They were doing patch work but now there will be a comprehensive work of the entire roof."

Cardoz said that a report has been sent to Mumbai Heritage Conservation Committee (MHCC) of the repair work needed. "The roof has needed help since the last three to four years but due to the cylcone the problem got aggravated," said David.

Cardoz said that during the week-long Mount Mary festival they tie a net to the roof as a precautionary measure so nothing falls down.

Cardoz added, "We have just been granted the permission and we will now be putting out a tender. Since we [Basilica of Mount Mary] are a charitable trust, we will have to put out a tender and get three minimum quotations. We are targeting all before the next monsoon. That is the deadline." 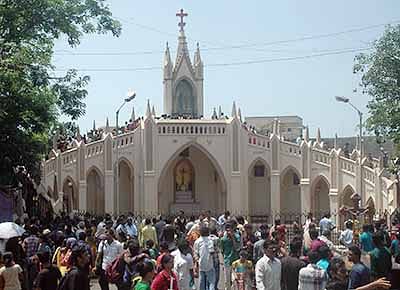 Features of the Basilica

The main Basilica building has a very distinctive roof line and has dormer windows. These windows, sitting in the roof, bring light into the attic or the darker areas of the loft spaces.

Speaking further on the roof and its architecture, Cardoz said, "There are two roofs-- the outer one is the Manglorean tiled roof that we are treating now. The roof inside is a false ceiling made of solid teak wood false ceiling and a beautiful barrell wall. The Basilica has vaulted roofs with beautiful places and all of it was made by an Indian."

He added, "We are taking all safety precautions to ensure that the shrine is not closed while we carry out the repair work. We also aim to finish it before the monsoon; may be by April end so that there is a little bit of a buffer period in case there is a delay."

Members of the Mumbai Heritage Conservation Committee, and Bishop John Rodrigues of the Basilica were not available for comment. An official from Mount Mary said that the Bishop is on tour and will not be in before Saturday.

Navi Mumbai: Kids among 4 injured as tempo rams into car