The foreigners still face charges of lockdown orders, visa violations as well as offences under the IPC such as negligent act likely to spread infection or diseases dangerous to life
Bhavna Uchil 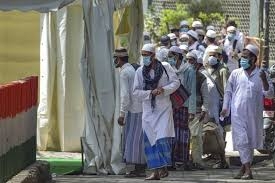 Mumbai: The 20 foreign nationals from Kyrgyztan and Indonesia who had attended the Tablighi Jamaat event in Delhi approached the Dindoshi sessions court on Saturday against an Andheri magistrate court order of Thursday which rejected their discharge plea.

In their plea filed through advocates Amin Solkar and AN Shaikh, they have sought that the lower court’s order be set aside. They told the court that offences of culpable homicide not amounting to murder and attempt to murder which the DN Nagar police had applied on them earlier had been dropped by a sessions court last month.

The revision application stated that the charges applied by the police are groundless (they still face charges of lockdown violations, etc) and that the magistrate court did not consider submissions, facts and appreciate the ratio laid down by the Bombay High Court’s Aurangabad bench. The bench had quashed the FIR against 29 foreigners in a similar case while remarking that the foreigners had been made "scapegoats" and that the state government had acted under "political compulsions".

“The court ought to have discharged them for want of material in the chargesheet,” the plea said, adding that the metropolitan magistrate “seems to be influenced by extraneous material not part of the chargesheet”.

Further, the application pointed out that the Bombay High Court had said that a masjid is not a public place and residing there would not violate guidelines or notifications of lockdown issues by the government. “The metropolitan magistrate seems to be very apprehensive about the applicants residing in a masjid, which is absolutely no offence” and said there is no material in the chargesheet to show that they were indulging in activities prohibited by law.

The foreigners still face charges of lockdown orders, visa violations as well as offences under the IPC such as negligent act likely to spread infection or diseases dangerous to life.

Rejecting their discharge plea, the magistrate court had observed in its 1 October order that though there is no legal evidence that they had spread infection, it said they had violated lockdown norms and for the material available on record, they must face trial.

The police had booked the foreigners alleging they had violated lockdown norms and were living in a mosque in Andheri in April.

On 29 September, a Bandra magistrate court had discharged 12 Indonesian nationals in a similar case.

The Tablighi Jamaat, a global evangelical Muslim organisation’s Nizamuddin Markaz event in Delhi in March where thousands congregated and later went to different parts of the country, was blamed for massive rise in cases in the country during the initial part of the lockdown.