Mumbai: Maharashtra home minister Dilip Walse Patil on Monday urged people of all communities to maintain peace and harmony, and help the police in maintaining law and order in the state after two dozen vehicles were vandalised in Mumbai's Mankhurd by unkown miscreants.

He said that members of some political parties have been giving "provocative" statements, which could increase enmity between Hindus and Muslims.

Patil ensured that appropriate legal action will be taken against those who instigate communal tensions in the state. "Please cooperate with us to maintain communal harmony in Maharashtra," Patil urged the citizens in a video.

Mumbai police on Monday registered an FIR against more than 40 unidentified people for allegedly vandalising 20 to 25 vehicles, including cars and auto-rickshaws, in Mankhurd area here, an official said.

One person was also injured in the incident that took place late Sunday night, he said.

Over 40 people, suspected to be residents of a nearby locality, reached the MHADA colony in Mankhurd on Sunday night and allegedly attacked parked vehicles - private cars, auto-rickshaws and two-wheelers - with swords and bamboo sticks, the official from Mankhurd police station said.

A person, identified as Abdullah Yakub Sheikh (32), was also injured in the incident, he said.

After being alerted, police reached the spot and detained a few persons, the official said.

The situation in the area became tense after the incident, but police brought it under control and urged people not to believe in rumours and fake videos being circulated on social media, he said.

An eyewitness, Anis Pasha, said, "The attackers were carrying swords and most of them were drunk. They severely thrashed a local resident. My three vehicles were also damaged in the incident." On the basis of primary information, the Mankhurd police registered an FIR against unidentified persons under relevant provisions for rioting and sections of the Arms Act, the official said. 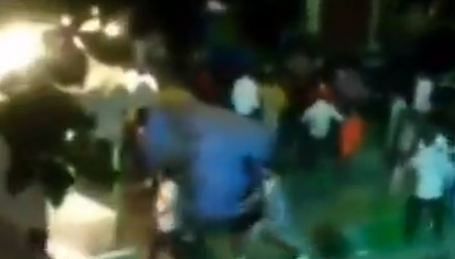