Fadnavis blamed the Uddhav Thackeray-led Maha Vikas Aghadi government for its inaction which had led to the loss of these projects.

Devendra Fadnavis said that if he had a rupee for every fake narrative against me, BJP by opposition & HMVs, BJP would be minting money' | Video Screengrab
Follow us on

Mumbai: In a rare incident, Maharashtra Deputy Chief Minister Devendra Fadnavis and the new Twitter boss, Elton Musk, were on the same page on the issue of the availability of money to change the fortunes of their respective organisations.

Musk had tweeted, ‘’If I had a dollar for every time someone asked me if Trump was coming back on this platform, Twitter would be minting money!’’

And if I had a rupee for every # FakeNarrative attempted against me and our party by the opposition + # HMV s, the BJP would be minting money! "said Fadnavis in a tweet. Fadnavis spelt out the BJP’s stand while targeting the opposition, especially after five major projects moved out of Maharashtra.

Fadnavis on Monday slammed the opposition and about four to five journalists for running a fake narrative that Maharashtra had lost five major investments to Gujarat and other states after the Shiv Sena BJP came to power. He had termed those five journalists as HMVs (His Master’s Voices).

However, he did not disclose the names of these five journalists. DyCM’s outburst came in the wake of an attack from the Thackeray camp leaders, including Aaditya Thackeray, Bhaskar Jadhav, and Sushama Andhare, against the Shinde Fadnavis government on a range of issues, including key projects going out of Maharashtra.

Journalists and writers express their opposition on social media

Some journalists and writers were also using social media to express their opposition to the Shinde Fadnavis government.

Fadnavis blamed the Uddhav Thackeray-led Maha Vikas Aghadi government for its inaction which led to the loss of these projects. He also claimed that it was an attempt to defame the state.

However, Shiv Sena Uddhav Balasaheb Thackeray leader and former minister, Aaditya Thackeray, had lashed out at Fadnavis for terming journalists HMV, saying that it was an insult to journalism and journalists. "It is quite insulting to use the term HMV for journalists who write against politicians. "Fadnavis should withdraw his words,’’ he added. 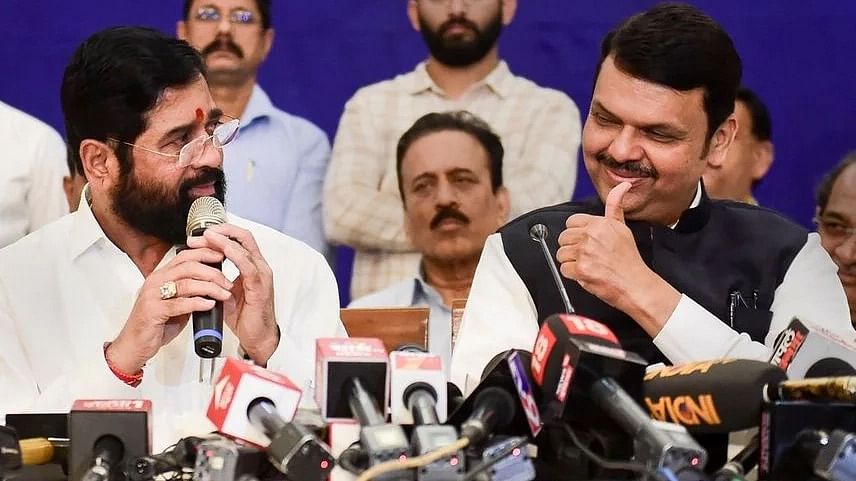