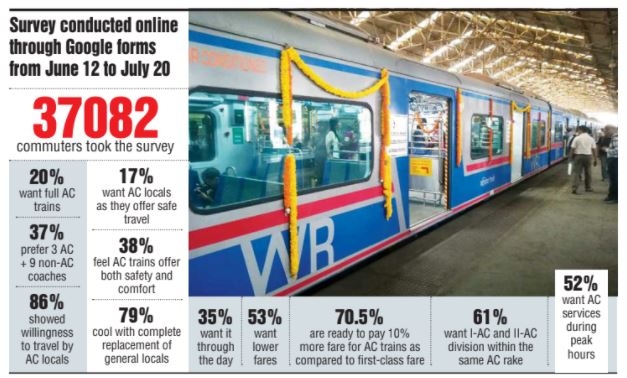 Following a public interest litigation in the Bombay High Court on commuter deaths from falling off trains, a railway expert committee was set up early this year to examine if AC trains with automatic door closure systems would be a feasible solution. No open doors would, of course, mean no deaths by falling off or stunts performed by miscreants or deaths by suicide.

The committee’s 77-page report, which was recently submitted to the Railway Board, comprises some key findings and responses from over 37,000 passengers and railway workers. The Free Press Journal has exclusive access to this report. Here is digest information from it, to help readers delve into the issue themselves.

Prior to the pandemic, seven to eight train deaths were reported every day. According to the report, from January 2017 to January 2021, 9,940 deaths were reported in the suburban section. Of these, 2,189 were from falling off trains. During a period of five years, Rs 108.9 crore was paid as compensation by the Railway Claim Tribunal, Mumbai, for deaths and injury cases.

With steps taken by the railways to avoid trespassing on the tracks, a sizable reduction in loss of life from being run over has been achieved. However, passengers accidentally falling off due to overcrowding has to be viewed seriously.

The six-member committee comprising senior administrative grade officers nominated by the railway board suggested that as a permanent solution to deaths by falling off trains, all rakes must have an automatic door closing system.

A committee member said that a trial for automatic door closure was conducted on a non-AC suburban train, but it wasn’t found feasible owing to carbon-dioxide build-up inside the coach. To prevent suffocation, all non-AC trains need to be phased out and replaced with AC local trains, with possible first and second class demarcation, with second-class AC costing only 1.5 times more than general second-class.

All future rakes procured for Mumbai suburban network under MUTP 3 and MUTP 3-A are recommended to be fully AC with automatic door closings system. Under this, 238 AC locals (47 in MUTP-3 and 191 in MUTP 3A) will be procured by 2024. With 25 years of life of rolling stock, these rakes will serve the suburban network until 2050.

Prior to making recommendations to the Railway Board in favour of full AC trains, the committee held meetings with representatives of railway worker unions, officials concerned, members of passengers associations, while also garnering public response through google forms. Over 37,000 passengers participated in the survey separately conducted by CR and WR from June12 to July 20.

Survey responses against AC trains listed frequency and fares as two key problems. Local trains run every three to five minutes. However, AC services are skeletal and isolated (one service every three hours); if a train is delayed by even a minute, the next one comes after a considerable time.

With this fare structure, it is difficult to encourage second class passengers to migrate to AC locals. In the absence of conducive fares, as a short term measure, experts have suggested partial AC locals, with six AC and nine non-AC coaches in the transition period. This works for 15-car suburban trains, which even WR has between Andheri and Virar on its slow corridor.

What’s ruled out, though, is a combination of six AC and six non-AC coaches in a train as it will reduce the seating capacity of second class passengers by 40 per cent.