For the last few years, using pronouns to describe one’s gender in English has become a common practice. But, when it comes to regional languages, the vocabulary is limited.

India has seen a paradigm shift regarding the treatment of the queer community. This can be attributed to a progressive judiciary and affirmative actions by NGOs across the nation.

Even as there is a discourse around the queer community, there’s a lack of better expressions for the gender queers to address themselves in Indian languages which are deeply divided by gender binaries.

The lack of expressions about their identities can be distressing for queer persons as London-based performer and author of Unicorn: Memoir of A Muslim Drag Queen, Amrou Al-Kadhi pointed out in an interview with a magazine.

Mumbai-based equal rights activist, Harish Iyer, agrees there’s absence of proper reference terms for the queer community in Indian languages. “We still don’t use proper names to address genitalia, even in English and use euphemisms instead,” he pointed and added that sexuality [and gender] education was the need of the hour.

The Tamil Nadu government recently took an affirmative action to address the issue. It published a glossary of reference terms for queer persons in Tamil. Although the glossary was largely adapted from Queer Chennai Chronicles, it did have some updates. Moreover, it was a first-of-its-kind move from a government.

When quizzed about how it will impact the queer community and society, Harish Iyer says that the move has set a positive precedent. “Tamil Nadu has a history of progressive attitude toward queer community, and they have furthered their stance with this move,” he noted.

While the author of Queeristan and LGBTQIA+ inclusion consultant, Parmesh Shahani, said that the government’s move makes him feel seen and recognised. “There have been many progressive judgements like the 2014 NALSA judgement, 2018 verdict on scrapping of Section 377 and many more. They should be translated in actuality,” he said.

Activists, language and linguistic experts have pointed out that there is a need to update the language.

Retired professor and a Sweekar parent, Nilakshi Roy, said making regional glossaries is pivotal as some words are crude and sound vulgar; the less offensive are “Sanskritised” and difficult to understand.

Sweekar is a support group for parents of queer children.

He added that unless people are taught the correct meaning of the words, they won’t understand the nuances.

Indian languages, their structure, and the possibility of change

Professor Anusha Ramanathan, who is a language educator at the Tata Institute of Social Sciences, Mumbai, opined that the need to update is dynamic.

“The perspectives differ among linguistic and language experts. There are experts who are trying to come up with verbs and pronouns which affirm one’s gender identity but there also are persons who want to do away with binary definition and just use the neutral approach. If one language has the subject-verb agreement where the verb's grammatical gender will be based on the subject’s (identity), people want to opt for a neutral approach,” she explained.

While Sachin Labade, language professor based in Mumbai, said there are two approaches to updating a language — either creating a glossary of new reference terms or looking back and using existing reference terms which are not offensive to the queer community.

“People today are comfortable using the words gay and lesbian to address homosexual individuals because the word was popular and people picked up on it eventually and rarely use the word samalaingik (homosexual in Hindi, Marathi). We can create a glossary out of popular words which are borrowed from other languages,” he said.

Even if one were to change the language structures, and adopt a neutral approach, these changes will not make a great dent in how queer community is treated. Undeniably, it will make it easier for society to understand the community better, but will it change the narrative?

Need for change of narrative

Parmesh Shahani recommended that allyship should be proactive and visible.

“Creating glossaries will have a better effect when the heterosexual community interacts with the queer community. Those in leadership roles — at private firms or government ones — and public officials must include queer persons in the workforce, they [queer persons] must be included in educational spaces,” Shahani concluded. 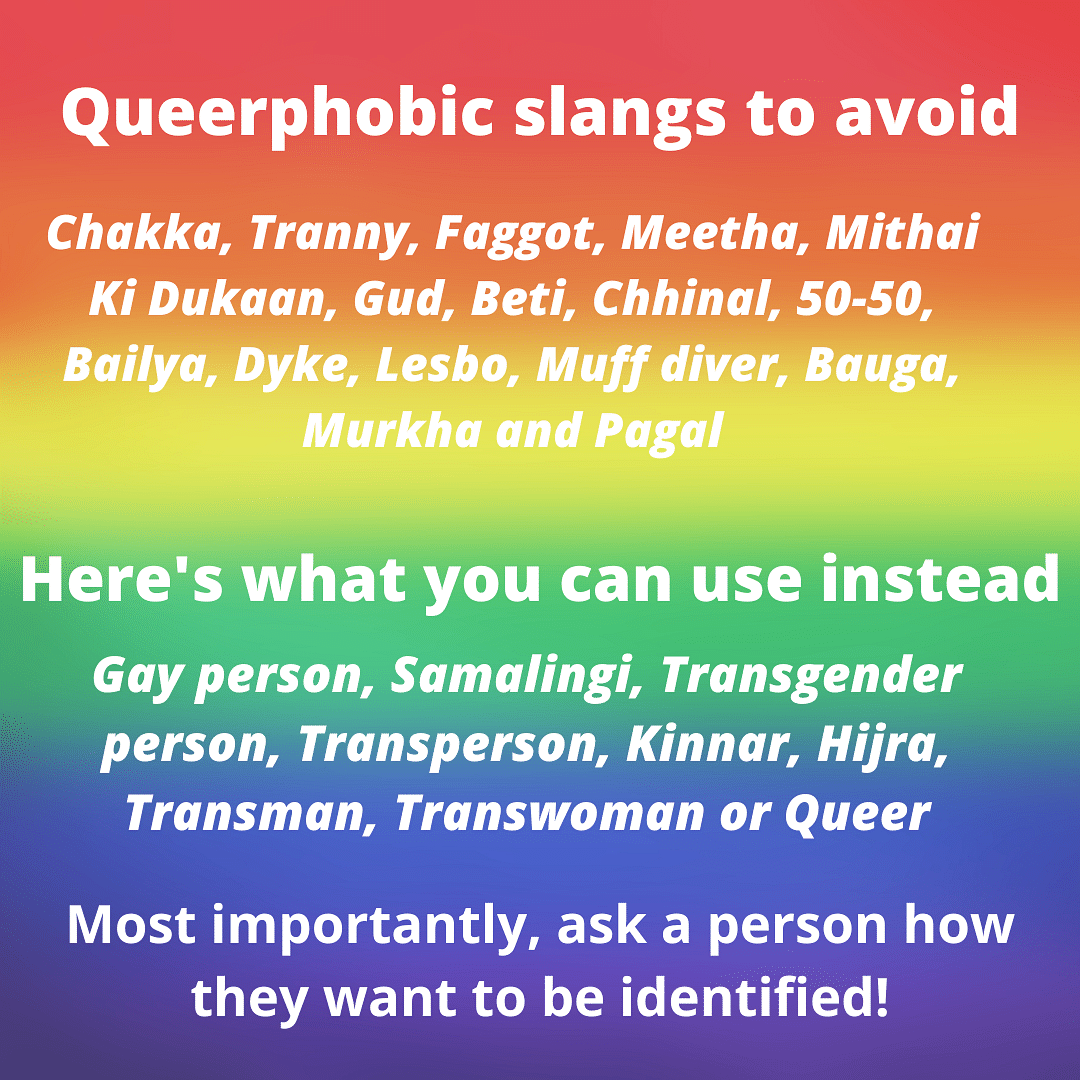 Quuerphobic slangs to avoid and what you can use instead | FPJ

Footnote: Gender queer refers to persons who do not conform to the gender binary--male or female. Gender queers could either be non-binary, gender fluid or gender non-conforming persons.

The subject-verb agreement occurs when a verb changes form depending on the subject.