Mission Begin Again: Shops in Thane to open after August 15

The shops will be allowed to function from 9 am to 7 pm following the P1-P2 system, said Thane's guardian minister Eknath Shinde.
Priyanaka Dhomse 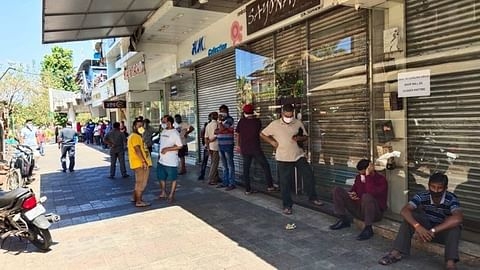 Thane's guardian minister, Eknath Shinde on Thursday announced that shops and commercial establishments will open after August 15, according to P1 and P2 system for a specific time. However, the decision regarding malls, gyms, markets and swimming pools will be announced later, he said.

"The commercial establishments will be allowed to function from 9 am to 7 pm following the P1-P2 system. However, both business merchants and citizens are requested to take all the necessary safety precautions. Considering the upcoming Ganesh festival, the citizens should avoid gatherings in public places," advised Shinde in a meeting held with Thane's traders and merchants in Thane.

Shinde also informed about the increasing percentage of patients recovering from Covid-19, in the meeting attended by TMC (Thane Municipal Corporation) commissioner, Dr Vipin Sharma and other senior civic officials.

"The percentage of patients recovering from the Covid has reached to 87 at present, while, the death rate has declined from 3.5 to 3.2 percent," informed an official from, Thane Municipal Corporation.

"The decision regarding other establishments will be announced after a report on these establishments is prepared by the civic body, after conducting a survey," added Shinde.