Bhim Koregaon accused and COVID-19 positive Stan Swamy taken to ICU due to heart ailment; condition critical |
Follow us on

Mumbai: The Bombay High Court bench of Justices Sambhaji Shinde and Nizamoodin Jamadar was on Thursday informed that arrested Jesuit Priest Stan Swamy is presently in the Intensive Care Unit (ICU) ward of the Bandra-based Holy Family hospital. The bench has allowed the octogenarian to receive treatment at the private hospital till July 5.

The judges were hearing a plea filed by Swamy through senior counsel Mihir Desai seeking bail on medical grounds.

The activist Swamy (84) who is arrested for his alleged involvement in the Bhima-Koregaon violence case is charged under anti-terror law - Unlawful Activities (Prevention) Act (UAPA) and is the oldest person to be charged under the law. Appearing for Swamy, Desai informed the bench that his client is presently in the ICU ward. "He was initially admitted to the ICU ward in the last week of May as he was infected with Covid19 and his saturation levels had dropped. However, later he was shifted to a normal ward," Desai submitted.

"But now again he is shifted back to the ICU section owing to some heart ailment," the senior counsel submitted.

The judges were meanwhile given the copies of the medical report submitted by Holy Family Hospital spelling out Swamy's condition.

Having perused the report, the bench said, "His (Swamy's) condition appears to be serious and needs medical care. There are some serious medical issues."

The judges accordingly, adjourned the matter till July 3 as Desai had sought time to respond to the NIA affidavit filed through special counsel Sandesh Patil.

The bench, meanwhile, permitted Swamy to continue with his treatment in the hospital till July 5. 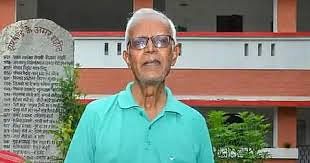