According to the police, the quartet led by the prime accused Dhiraj Dubey (38) barged into a plastic bag traders' shop located in 60 feet road area of Bhayandar (west) at around 7:30 pm on Wednesday.

Four people, including a self-proclaimed journalist and a woman, who were arrested over an extortion bid from a plasticware trader in Bhayandar on Wednesday, have been remanded to two days of police custody after they were presented before the Thane district sessions court on Thursday.

According to the police, the quartet led by the prime accused Dhiraj Dubey (38) barged into a plastic bag traders' shop located in 60 feet road area of Bhayandar (west) at around 7:30 pm on Wednesday. Claiming to be the co-editor of a local newspaper, Dubey and his accomplices identified as Kavita Yadav, Ashok Mishra and Kesar Bhansingh, accused the trader of selling banned packaging material. When the trader confronted them by saying that he was selling only packaging material manufactured out of sugarcane pulp which was duly stamped as legitimate by the government, the gang threatened to register bogus cases that could land him in trouble.

When the trader refused to give in to their demands, the woman dialled the helpline number and summoned the police. The matter reached the police station. However, Dubey started demanding Rs. 25,000 from the trader to hush up the matter. The trader informed the police about their demands. Sensing the seriousness of the matter, the on-duty police personnel, in an attempt to gather evidence and nab the accused red-handed, asked the trader to negotiate with the accused, following which the demand was scaled down to Rs 4,500.

The police then laid a trap and sent the trader with Rs 4,500 in marked notes. All of them were arrested after they came to collect the money near a temple at around 9:20 pm.

Accordingly, an offence under section 386 (extortion by putting a person in fear of death or grievous hurt) of the IPC was registered against the accused persons, who have been remanded to custody.

The police also seized a press identification card from the possession of the accused.

"The accused were remanded to 2-days police custody. Detailed investigations were on in the case," said senior police inspector- Mukutrao Patil. 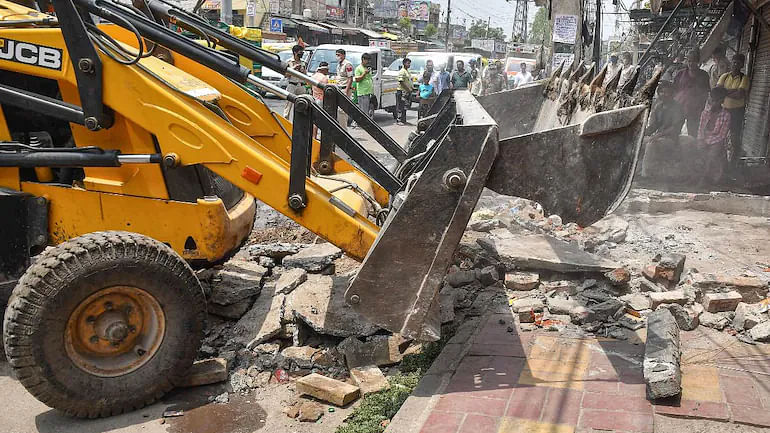