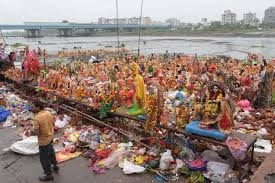 Mira-Bhayandar: As uncertainty looms over how the upcoming Lord Ganeshutsav festival will be celebrated amid the Covid-19 pandemic this year, idol makers in the twin-city are facing a double whammy due to a confusion that was triggered by an order issued by the Mira Bhayandar Municipal Corporation (MBMC).

Keeping in view of the deadly coronavirus pandemic, last week, the civic administration had issued guidelines to be followed while celebrating the Dasha Mata Utsav. Apart from other protocols, the administration had specifically restricted the use of lakes, ponds and creeks while mandating idol immersions of the goddess at home or in the building premises.

The order not only created confusion but also gave rise to widespread speculation that the guidelines orders were likely to be replicated for the 11-day Lord Ganeshutsav festivities which will begin from August 22 and continue till September 1. The fear and speculation led to massive cancellation of pre-booked plaster-of Paris idols, putting the sculptors and their workforce in a spot.

There are around 42 idol making units which render employment to hundreds of sculptors, artisans and painters in the twin-city.

BJP corporporar- Prabhat Tai Patil has also sought the intervention of the civic chief and mayor to resolve the issue.

The total number of Lord Ganesh idols which graced the twin-city during the 11-day festival had touched 20,569 in 2019 as compared to 20,543 in 2018. The figures include the maximum number of household idols.

While there are 22 public immersion points in the twin-city, around 880 idols were immersed in the lone artificial pond created by the MBMC to promote eco-friendly celebrations. Official guidelines on what type and size of festive celebrations should be permitted in the twin-city is still awaited.

Notably, the twin-city has already recorded more than 7,900 cases and nearly 260 deaths so far.