Nearly 90,000 have been evacuated so far. 7 NDRF teams are engaged in rescue operations, additional 8 teams being requisitioned from Bubaneshwar.
Sanjay Jog 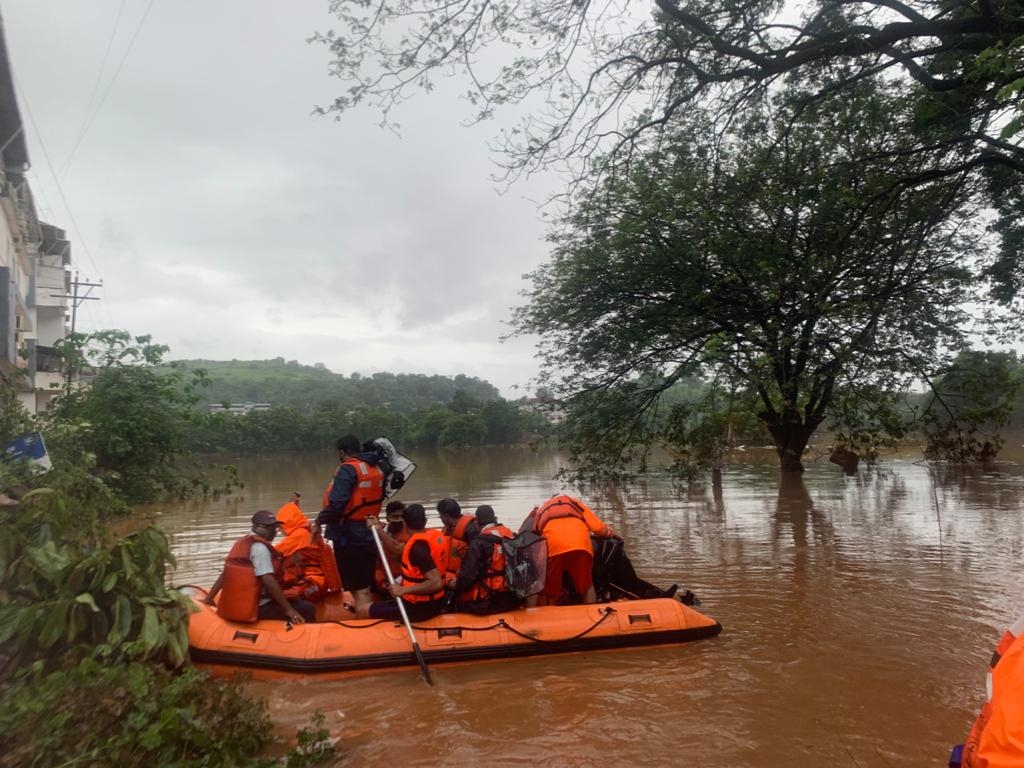 The Maharashtra Government on Saturday released a status report of floods in various parts of the state due to incessant rains. As per the compilation made by the disaster management, relief and rehabilitation department, as many as 90,000 people from flood hit districts have been evacuated so far. Nearly 76 people and 75 animals lost their lives, 38 are injured and 30 people are still missing.

Chief Minister Uddhav Thackeray will be visiting the affected areas later on Saturday. He is set to leave for Mahad at 12 pm by chopper, following which he will visit Taliye by road at 1.30 pm. There, he will go to villages where more than 49 have died in landslides.

According to the department, apart from the 17 teams of the NDRF present here, an extra 8 teams were requisitioned from outside the State from Bubaneshwar. Aslo, support of the other forces including the army, navy, coast guard and Air force was sought.

Apart from the above, 8 more teams of the NDRF are being requisitioned tomorrow and will be deployed additionally as follows- 2 teams to Kolhapur, 1 team to Satara 2 teams to Sangli, 3 teams to Pune. Besides, the re-positioning of existing teams will be done as per the situation in the districts.

The department said torrential Rainfall in various parts of the State often coinciding with high tides and also discharge from dams led to various regions in the State getting inundated thereby resulting in floods across multiple districts in the State.

Mahad and Poladpur in Raigad, Chiplun and in Ratnagiri along with various areas in Satara, Kolhapur and Sangli have been affected. Also flood situation arose in the districts of Thane and Palghar.

The towns of Chiplun and Khed were completely inundated due to discharge from the Koyna dam and subsequently the Koltewadi dam leading to the rise in the levels of the Vashisti river. The contact from the town was completely cut off due to land routes being inundated. The bridge over the Vashisiti river on the Mumbai Chiplun route was washed off. Thousands of people were stranded on roof tops and upper floors of the houses as the water levels rose to over 15 to 20 feet in many places.

NDRF and Coast Guard teams were deployed. Helicopters of the Airforce were also deployed for rescue and air dropping of food and water packets. Relief camps were set up at three locations where all arrangements were made for the rescued people. One column of the army was also dispatched for relief efforts. Coast Guard teams were also dispatched to the spot. More than 1000 people were safely evacuated by the various response teams.

The rains also led to landslides in Khed Taluka. NDRF teams worked to rescue trapped people from the debris. Currently the waters in most places have decreased and cleaning work is in progress. A fund of Rs 2 crore has been provided to the district for response and relief through the State Disaster Response Fund.

Heavy rainfall led to the Savitri river bursting its banks and flooding Mahad and Poladpur regions. The whole town of Mahad was completely cut off and was not accessible by road. Many people were stranded on roof tops and upper floors of the houses.

Due to heavy flow of the Savitri river over the bridges, rescue teams could not reach the said regions.

NDRF teams were airlifted to the locations for rescue efforts. However, they could not land due to bad weather. Subsequently rescue was carried out by the NDRF and relief camps were set up at Mangaon.

Currently, the waters in Mahad have receded and clean-up is in progress. A fund of Rs 2 crore has been provided to Raigad for response from the department through the State Disaster Response Fund.

Due to torrential rainfall in the district with Mahabaleshwar receiving more than 1100 mm of rainfall in less than 48 hrs resulted in heavy discharge from the Koyna dam.

Currently, due to the continuous rainfall and the discharge from the dam, water levels across various parts of the district are rising. The district administration is shifting people from vulnerable areas and is on high alert for an impending flood situation. Extra teams are being deployed in anticipation of the same.

Due to heavy rainfall in the district and heavy discharge from the Koyna dam, rivers in the district including the Panchgana have breached the danger mark and have caused inundation in many areas. District administration has evacuated people from low lying areas with help of NDRF and local teams.

However, the Almatti dam is also discharging water due to which the situation is still under control. The district is on high alert and more teams are being deployed to face any eventuality. A fund of Rs 50 lakhs has been allocated to all other affected districts for immediate response. FPJ Anniversary: Mumbai is not a planned city; it grows like an amoeba, says Mayor Kishori Pednekar