Bengaluru: A special CBI court here has sentenced five men to seven years rigorous imprisonment each and fined them over Rs 5 crore in total for misappropriation of funds belonging to a Karnataka government body.

Of this, Rs 5.02 crore will be paid as compensation to Mandya Urban Development Authority (MUDA) which these five men cheated and the remaining will be forfeited to the state. If they default in paying the fine, the convicts will spend another two years in prison.

Based on the orders of the Government of Karnataka, the CBI and Anti-Corruption Bureau (ACB) had registered the case on March 18, 2014. The five men were released on bail on July 22, 2015.

They had been charged under various sections of the Indian Penal Code (IPC) and the Prevention of Corruption Act.

Kebballi Anand is in the iron ore business with a registered company named A R Logistics. Nagalingaswamy is the CEO of Future Farm & Estates, Chandrashekar is the proprietor of Akash Enterprises, a real estate firm; Nagaraja is a first division assistant in MUDA, and Harshan is an employee of Anand.

In the case, all five men fraudulently filled vouchers and cheques, and then misappropriated five cheques amounting to Rs 1 crore each issued by the then Commissioner of MUDA in favour of Indian Bank, Mandya branch to invest in the authority's name.

The five men had conspired to deposit the money in the account of Akash Enterprises instead and caused a loss of Rs 5 crore to MUDA, the court said. 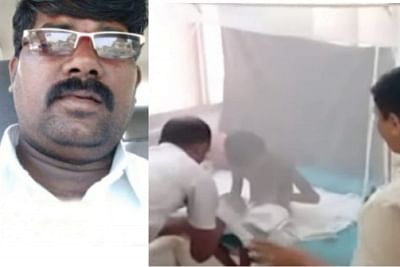