The suspects were produced before a Karnal court where they were sent to 10-day police remand.

With the arrest of four terror suspects in the wee hours of Thursday in Karnal, the Haryana police has claimed to have busted a big terror plot in a joint operation with Punjab police and Central security agencies.

Stating that the arrested persons have been identified as Gurpreet Singh, Amandeep Singh, Parminder Singh, all from Ferozepur and Bhupinder Singh from Ludhiana, Khirwar said that a case under the relevant sections of IPC, Unlawful Activities (Prevention) Act (UAPA) and under Arms Act had been registered against them in Madhuban police station.

The suspects were produced before a Karnal court where they were sent to 10-day police remand.

Meanwhile, the Punjab police held that it had successfully averted a possible terrorist attack by giving a hot chase of over 300 km and getting four suspects arrested with the recovery of three IEDs packed in a metallic case (2.5 kg each) and one pistol along with ammunition.

The director general of police (DGP) Punjab, V K Bhawra said that the Central agencies had shared an input that some suspects, who may be carrying explosive material and weapons were moving in the border districts of Fazilka and Ferozepur.

Subsequent to this input, police teams led by Commandant Punjab Armed Police (PAP) Harkamalpreet Singh Khakh along with teams from Central agencies carried out a manhunt and identified suspected locations in the districts of Ferozepur, Fazilka, Faridkot and SAS Nagar. The suspects later started moving in a white Innova vehicle Ludhiana and subsequently towards Ambala (Haryana), when sharing the development with Haryana police, which, the DGP said, intercepted the vehicle in Karnal and arrested the accused with ammunition and IEDs.

He said that accused were working for Pakistan-based gangster-turned-terrorist, Harwinder Singh alias Rinda, a notorious gangster active in Punjab, Chandigarh, Maharashtra, and Haryana and wanted by the Punjab police in heinous crimes including murder, contract killing, robbery, and extortion. 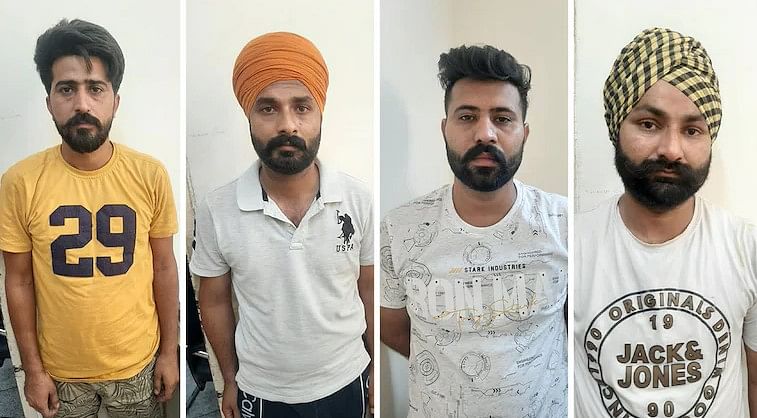