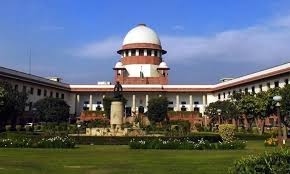 New Delhi: The Supreme Court on Wednesday issued notice to the Tripura government on a plea against its decision to invoke the Unlawful Activities (Prevention) Act (UAPA) against two lawyers, and a journalist.

A bench of Chief Justice N.V. Ramana and Justices D.Y. Chandrachud and Surya Kant said: "Issue notice. No coercive steps..." Advocate Prashant Bhushan, representing the petitioners, submitted that the FIR was lodged against them after the advocates went for a "fact finding" job in connection with the violence in the state.

The bench decided to seek response from the state, but declined for now, the request by Bhushan to tag the matter with a pending plea against constitutional validity of the provisions of the UAPA. On November 11, the Supreme Court agreed to hear a plea challenging the Tripura Police's decision to invoke the Unlawful Activities (Prevention) Act (UAPA) against several lawyers, activists and journalist Shyam Meera Singh.

Initially, the top court asked advocate Prashant Bhushan, representing the petitioners, to move the concerned high court in the matter, but later agreed to hear the matter. Bhushan submitted before the bench that the petitioners are also challenging the constitutional validity of certain widely misused provisions of UAPA and the wide definition of 'unlawful activities'.

The petitioners said the present petition is being filed under Article 32 of the Constitution in relation to the targeted political violence against the Muslim minorities in Tripura during the second half of the month of October, 2021.

"The subsequent efforts by the State of Tripura to monopolise the flow of information and facts emanating from the affected areas by invoking provisions of the Unlawful Activities (Prevention) Act, 1967, (hereinafter, UAPA) against members of civil society including advocates and journalists who have made the effort to bring facts in relation to the targeted violence in the public domain", said the plea.

Recently, the Tripura Police had booked a journalist and other activists for offences punishable under the UAPA. The petitioners - Mukesh, Ansarul Haq Ansari, and Shyam Meera Singh -- moved the Supreme Court seeking to quash the first information report (FIR) registered against them.

According to the petition, the fact finding report titled as "Humanity Under Attack in Tripura #Muslim Lives Matter," published on November 2, by Lawyers for Democracy, on the findings of a four member fact finding team comprising advocate Ehtesham Hashmi (Supreme Court), advocate Amit Srivastav (member, coordination committee , Lawyers for Democracy), advocate Ansar Indori (National Secretary, NCHRO), and advocate Mukesh (Member, PUCL Delhi) has brought on record evidences into the orchestrated and targeted violence perpetrated by political right wing forces on the minority Muslim community in Tripura in October - purportedly as a counter to violence perpetrated on minority the Hindu community in Bangladesh, which continued until October 26.