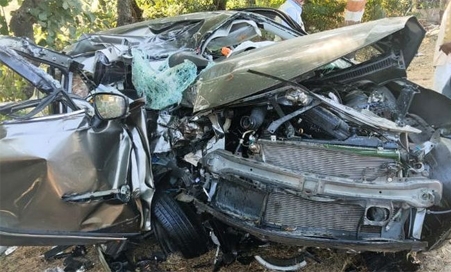 Ujjain: In an unfortunate road accident on Bhopal Road a constable lost his wife and his child on Wednesday.

The constable and his family were going to Bhopal in a car. The head on collision with an unknown vehicle has damaged the car. In constable has also received serious injuries. The incident took place near Ashta.

Police said that constable Vimlesh Shukla posted at Madhav Nagar police station was going to Bhopal with his wife Nainika and sons Anand and Anuj car. Near Ashta an unknown vehicle hit his car and his wife Nainika and his younger son Anuj died on the spot. Anand had a close shave as he was sitting on the back seat of the car. The injured constable was rushed to Indore for treatment.