Pillar damaged due to flood

Sanawad (Madhya Pradesh): Mortakka Bridge over Narmada River on Indore – Icchapur state highway has been closed for heavy vehicles after a crack developed in a pillar.

Officials who inspected the crack with the help of a drone camera said that only light vehicles including cars, and passenger buses will be allowed to use this bridge. They did not say when heavy vehicles will get permission to use the bridge.

On Thursday, NHAI director Manish Asfi along with teams from SGSITS, Indore and IIT, Indore visited the spot and inspected the pillar which has developed a crack.

According to information, pillar No 3 (from the Barwah direction) developed a crack after the recent flood in the Narmada river. The authorities came to know about the crack after the floods subsided on Wednesday. After this, the team NHAI inspected the bridge.

Officials said water is being released continuously from dams, including Bargi in Jabalpur district, Omkareshwar and Indira Sagar in Khandwa district and Tawa in Hoshangabad district, built on the Narmada river and its tributaries following heavy rains in the state.

The bridge was constructed on the Narmada river in 1952 by the state government and it had life of 60-year - 2012. Initially, the bridge was meant for vehicles up to two tons and with increases in traffic and vehicle sizes over years, the bridge has suffered heavy damage with time.

With Indore – Icchapur state highway connecting Indore to the southern Indian cities including Akola, Jalgaon and even Hyderabad, the bridge plays a crucial role.

Bridge damage over the years

The bridge has been damaged twice in two years. At present no officer can tell how many days it will take to repair it as the water level is still flowing up to 160 metres mark.

As per the records available, in the last 52 years, Narmada water has submerged the bridge 14 times.

BRIDGE AT A GLANCE 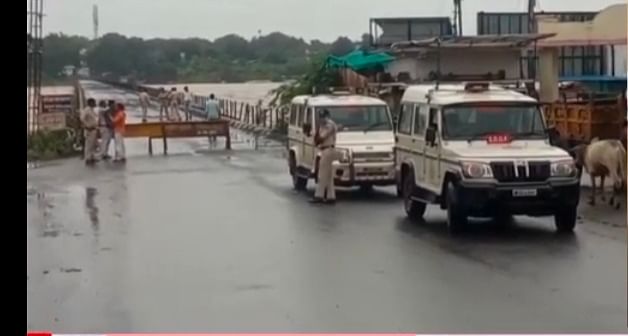