Three of the four patients Kapil Dev Bhalla, Priyal Jain and Anish Jain have won the battle of life with the help of plasma therapy.

Wednesday saw a double bonus for Covid-hit Indore as about 141 more corona patients were discharged from four hospitals of the city. It was the highest number of patients discharged IN A SINGLE DAY.

It doesn't end there. The other silver lining is that discharged patients also include three of the four patients who had opted for plasma therapy trial, a 2-month-old boy and a 4-day-old girl.

With this, total number of patients discharged from Indore so far reads 629 "officially".

Plasma Therapy proved boon for them

Three of the four patients Kapil Dev Bhalla, Priyal Jain and Anish Jain have won the battle of life with the help of plasma therapy. They were the first batch of patients on whom the trial of plasma therapy was done and they were discharged from the hospital in 10 days.

“We have successfully discharged them. The fourth patient is also healthy but he didn’t go home as his family member is admitted. He is also ready to be discharge and will go home soon,” Chairman of Shri Aurobindo Institute of Management Dr Vinod Bhandari said.

He added that it was the biggest challenge for them to trial the plasma therapy but the attempt paid off.

People’s prayer saved me, we should pray for all COVID-19 patients

Public Relation Officer of Indore Development Authority Kapil Dev Bhalla was among the three who had gone through plasma therapy treatment. Bhalla shared his experience with Free Press.

“With the people’s prayer, love and care shown by doctors and administrative officials, I survived. I had given consent for plasma therapy immediately when doctors asked me without thinking for a minute and it saved my life. I am thankful to Dr Dosi, Dr Kalpana and other staff of SAIMS for saving my life.” He said adding “We should all wish them health and pray for COVID 19 patients who are struggling of it.”

Be Positive, it’s not the end of life

Software engineer in Bangalore Priyal Jain said that plasma therapy has yielded good results.” I was not able even to breathe by myself and was on artificial oxygen before plasma was transfused. Improvement was witnessed from the second day. I am thankful to the doctors and staff of SAIMS who brought me back from the brink,” she told Free Press.

She appealed to the people to remain positive and said that it is not the end of the life if you are COVID-19 positive. Things will improve and it just needs positivity and will power.

Anish Jain too shared that he was struggling to breathe and his lungs were damaged. “Doctors took the consent of plasma therapy from me and my family and the decision changed my life. They brought me back to normal life again and I am successfully going home after beating the deadly disease,” he said.

A four-day-old baby girl was also discharged from SAIMS on Tuesday along with her mother Eram. She was born in the hospital four days ago as doctors performed delivery after her mother’s first report tested negative. “We had taken the samples of the one-day old girl and her reports read negative when she turned four-day old. We discharged her with her mother and both of their reports were negative,” COO of SAIMS Rajeev Singh said.

He added that they have discharged as many as 334 patients so far and have 45 per cent patients discharge rate which is higher than the national percentage i.e. 28 per cent.

A two-month-old baby Swajay Tiwari was also discharged from Choithram Hospital. He was admitted with his mother who expressed gratitude towards doctors while being discharging from the hospital. 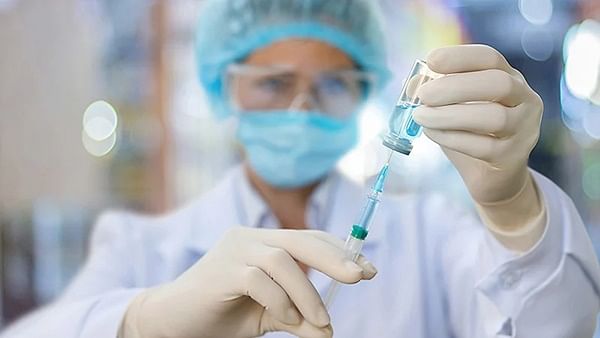