Guna (Madhya Pradesh): A woman was run over by a train, while her three-year-old son died of head injuries after she threw him away from the track in an attempt to save him in Madhya Pradesh's Guna district on Friday, police said.

The incident took place in Gulabganj area when the victim Manju Ojha (27) was crossing a railway track with her son Ram Lakhan, inspector Vinod Chabai of Cantonment police station said.

The woman saw a train closing in on them and threw the boy away from the track, he said.

The woman was crushed to death by the train, and the boy who fell on stones sustained head injuries and was declared dead at a hospital, the official said.

The victims, who hailed from Rajasthan, had come to Guna to attend a function at a relative's place, he said, adding that the bodies were handed over to the family after post-mortem. 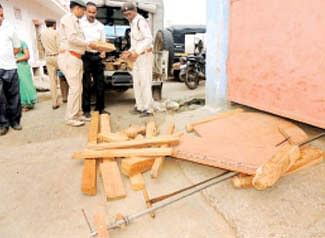