Madhya Pradesh: Two teachers among six held with hide and nails of leopard 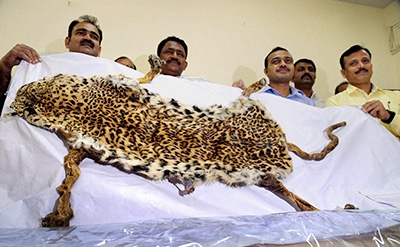 Jhabua (Madhya Pradesh): Six people, including two teachers, were arrested while they were trying to sell a leopard hide and nails of the animal near Jhabua district.

Following a tip off, a joint team of the state Tiger Strike Force, Wildlife Crime Control Bureau and Special Task Force (STF) of police on Saturday nabbed the accused from Petlawad-Rajod road in the western part of the state, principal chief conservator of forest (Wildlife) Alok Kumar said.

A leopard hide and six nails of the feline were seized from their possession, he said, adding that two of those caught are teachers.

Six mobile phones, a four-wheel vehicle and two motorbikes used in the illegal trade were also seized, he said.

Accused were booked under provisions of the Wildlife Protection Act, he said.

The accused included four residents of Alirajpur and two from Dhar district, the official said.

Madhya Pradesh: Man forgets promise made to his wife of not eating ‘Gutkha’, upset wife...