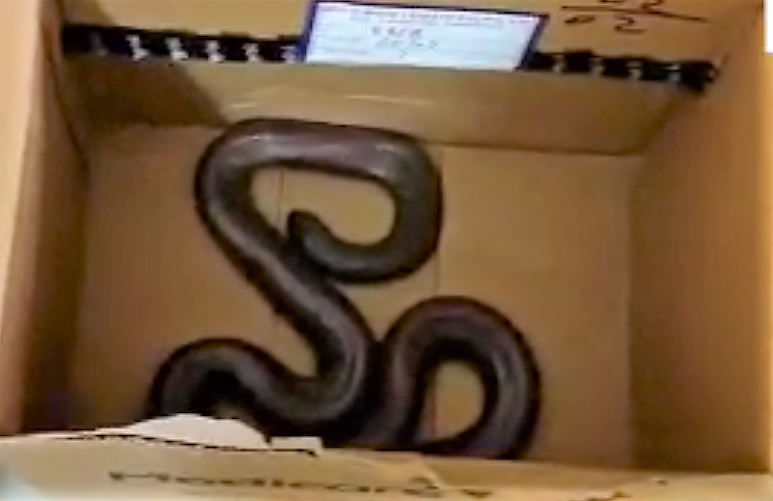 Indore: Special Task Force (STF) seized a rare snake, known as a 'two-headed' red sand boa, from illegal smugglers on Thursday. They handed over the snake to forest department on Friday. The smuggler was arrested in Dharampuri, Sanwer while trying to sell the rare snake.

The red sand boa is a protected species, and looks like it has two heads, because its tail is shaped like its head to help it defend itself.

The snake is prized heavily in black market because many believe it brings good luck or has medicinal qualities.

Registering a case against the smugglers, three people including one minor were arrested. They had confirmed the deal and were selling the protected creature for Rs 25 lakh.

Constable Vishnu Yadav, after receiving a tip-off, formed a trap and went undercover pretending to be a wealthy buyer and sought the snake for Rs 25 lakhs. After the amount was submitted by Yadav, the trio opened the box with snake.

The trio was arrested by a team on direction of SP (STF) Padma Vilochan Shukla on Thursday and the rare snake was handed over to forest department on Friday. The team was headed by inspector Sanjay Baghel and sub inspector Malay Mahant.

As shared by Shukla, “The three boys including one minor were taken under arrest and presented in front of the court on Friday.” He added that as of now, the trio had found the snake in Sagar and decided to earn lump sum money by illegal trading of the rare species.

Two bikes and two mobile phones have also been confiscated.

Another minor of 16 years was arrested.

The market for the ‘two-headed’ red sand boas is ‘basically another form of cheating’, TR Hatila, deputy forest ranger, said.

He added that it is invariably used to cheat people who have some belief that it will act as good luck charm.

Hatila said, “It is a fallacy that it has two heads. The head and tail of the snake look alike, so if anyone tries to catch it, it strikes from the other end which is the head.”

Thanks to the superstition that the red sand boa will bring its owner treasure, demand for the snake is high, with people even hiring them out for ceremonies, he added.

Further, as shared by Anita Bhandole, forest official, "It is even used for conducting rituals that would bring in rain or money. It is even believed that the heavier the snake, the more riches it will bring. So, the black market dealers shove ball bearings and other objects into the snakes. These animals die a very painful death."

The rescued two-faced snake weighs about 1 kg and is 3.5 feet long. Luckily for this particular snake, though, it was rescued - and will be set free.