“We cannot let any seat go waste. We should encourage students to come to our institutions,” he said while addressing the inaugural session of NSIL-2023 where VCs and directors from different institutions were present.

Indore (Madhya Pradesh): Calling upon higher education institutions to ensure that all seats in their campuses are filled, University Grants Commission (UGC) chairman Prof Mamidala Jagadesh Kumar here on Monday said that every seat that goes vacant is a national waste.

“We cannot let any seat go waste. We should encourage students to come to our institutions,” he said while addressing the inaugural session of NSIL-2023 where VCs and directors from different institutions were present.

Addressing the gathering, Kumar said that today’s students are tech-savvy and it’s the teachers who have to rise to the occasion.

On the issue of research, Kumar said that research funding is highly competitive and that around 75 to 80 per cent of project proposals prepared by teachers are rejected because of poor quality or poor objectives of the project proposals.

“Institution leaders are not putting enough effort to train their teachers to be able to write successful project proposals,” he said.

The UGC chairman said that recently they have issued guidelines for the formation of R&D cells in universities and colleges.

“It shouldn’t be just a mechanical formation of R&D cell but it should be a vibrant centre in the university organising workshops for young faculties to train them to write successful project proposals, to give them information about announcements regarding project funding, train them how to run a project, how to do the purchasing and how to submit utilization certificates,” he said.

On G20 Presidency, Kumar said, “G20 represents almost 60% of the global population, it represents nearly 74% of global trade and nearly 90% of patents are generated in these G20 countries. That’s why India's assuming G20 Presidency is an important event.”

“Through NEP-2020,” Kumar said, “we are trying to bring a lot of transformation in education.”

“To implement NEP-2020, there is a need for funding to build our infrastructure, train our teachers, and provide better research facilities in our colleges and universities. There is no doubt about that. The good thing about NEP is that the majority of its components can be implemented by simply transforming our attitude towards education. If the leadership in the institution takes the first step, and sits with its teachers and students and discusses NEP, then the majority of the components can be implemented,” he said.

Implement ABC without any delay: Kumar

Describing the Academic Bank of Credits (ABC) as being exceptionally important, Kumar said that when foreign teams visit UGC and they tell the visitors about ABC they (the visitors) feel their country should also have such a system.

“We are already one step ahead of many developed countries in implementing this platform called ABC. Institutes should get every student registered on ABC and upload their credits, their grades, and their transcripts on the ABC portal,” he said and added, “Ensure that from the coming semester, every student is registered on ABC.”

“This should be implemented without any delay,” he added.

NEP-2020 is not only working but it is running: Sarkar

Union minister of state for education Subhas Sarker said with NEP international institutions will make India their home. “Prestigious Indian institutions are also looking to set up offshore campuses. “Under Indian Knowledge System (IKS), already 64 inter-disciplinary research projects have been started and 2000 internships on IKS have been offered. NEP is not only working but it is running,” he stated.

The minister said that there is a demand for student mobility not only in form of outgoing students but also incoming students. “India is a popular study destination for students from SAARC, African and Central Asian countries. We should build on it. Education has become more internationalised and demand for quality education goes beyond geographies,” he said.

What facility can I give in three-room college?: Principal

During an interaction session, Pithampur Government College principal, Vinod Khatri, asked the UGC chief what quality and facilities he should extend in a college that has only three rooms. He also stated that government asks him to get NAAC accreditation done.

“My college self-study report has been approved, and the NAAC team wants to visit the campus for accreditation,” he rued. A girl scholar said that the college offers computer science courses but there is no computer in it.

Replying to Khatri, the UGC chairman said, “I come from a village where I studied under a tree. There was no electricity. I came from such a system. But if you see in the last 50 years there has been much progress in India. We are progressing and we trying to build infrastructure but it’s a monumental task…. Look at the roads that are being built, look at the hospitals being built and the fact that we managed to administer more than 200 crore Covid jabs. Our India is progressing and the whole world is watching us.”

Read Also
Bhopal: Divorce was never an option in Vedas 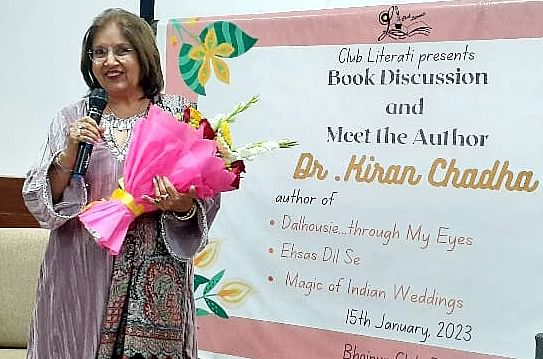