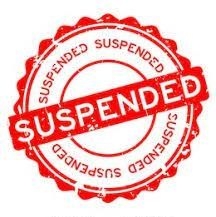 Jhabua (Madhya Pradesh): A police station in-charge and an assistant sub-inspector were suspended after some video and audio clips surfaced in which they were purportedly seen cane-charging and heard abusing people in Jhabua district.

The incident took place at a square in Raipuria town on Saturday night, about 40 kilometres from the district headquarters. During the incident some people also thrashed the police station in-charge, said onlookers.

An audio clip of assistant sub-inspector Ajit Singh, who was accompanying Bamania, also surfaced in which he was allegedly heard abusing the people, she said.

The official said that Bamania appears to be in an inebriated state at the time of the incident.

Some of the people also allegedly beat up Bamania, who had sustained injuries and has undergone a medical examination, she added.

Taking cognisance of the videos, police officers have Bamania and Singh were suspended but no case has been registered in the matter.

Initial information suggested that the police station in-charge was in an inebriated condition. His medical report is awaited, the SP said. Both the policemen were suspended for their alleged misconduct, he said.