Nath reached Ranapur and addressed a public meeting in support of Congress candidate Kantilal Bhuria. Chouhan is campaigning in Jhabua for past two days.
Staff Reporter 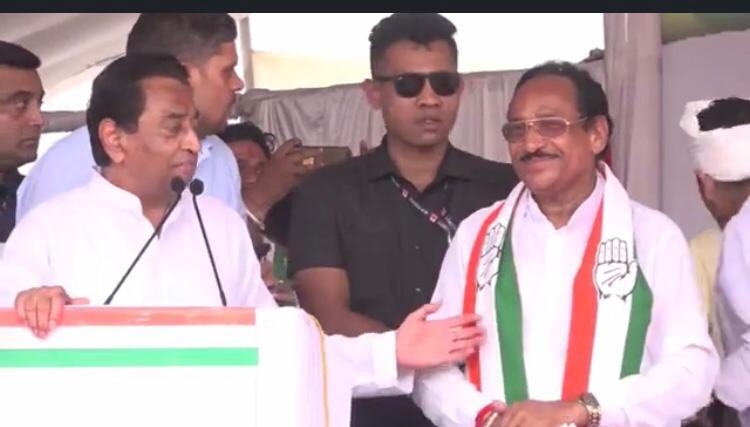 Nath reached Ranapur and addressed a public meeting in support of Congress candidate Kantilal Bhuria. Chouhan is campaigning in Jhabua for past two days. Chouhan did night halt on Friday at Bhuria’s village, Mordondiya. Chouhan is working hard for the victory of BJP candidate Bhanu Bhuria.

Nath in his address said Kantilal made vigorous efforts for Jhabua’s development. He said those who ruled for 15 years in the state must tell what they did for Jhabua’s development. Nath narrated the works done by the state government in past ten months. He alleged that people of the state have dethroned Shivraj Singh and the same will be done by the people of Jhabua. Nath said Bhuria will win but Kamal Nath will ensure that people’s works are done.

Chouhan, in his public meeting in support of BJP candidate, said Kantilal has destroyed Jhabua and the state. He claimed that Congress, after coming to power, has stopped all schemes which were run for poor. Chouhan said people should take revenge from Congress by giving vote to the BJP. Chouhan also asked Nath to give reply to his 20 questions.

Scindia, other leaders skip campaigning: Ex-MP Jyotiraditya Scindia, who worked hard for Congress win the assembly polls, did not go to Jhabua for campaigning. The reason behind Scindia not going for campaigning is said to be his distance from Chief Minister Kamal Nath and other Congress leaders. Former state president Arun Yadav, former leader of opposition Ajay Singh and others did not go for campaigning.

BJP banking on Shivraj: BJP candidate Bhanu Bhuria is said to be weak candidate before Kantilal Bhuria, who is highly experienced. Though, BJP state president Rakesh Singh came for campaigning but the party finally banked on Shivraj Singh Chouhan. Chouhan was assigned campaigning in the final phase. Chouhan did campaigning earlier for two days. The BJP is banking on Chouhan.

Forming government, getting ministerial berth: BJP leaders are publicizing in Jhabua bypolls that if BJP wins then there will be possibility of the party forming the government in the state. Congress leaders are claiming that if Bhuria wins that he would be appointed as minister.