Masked woman captured near the rings

A CCTV grab showing the suspected accused |
Follow us on

Indore (Madhya Pradesh): A woman wearing a mask allegedly stole two gold rings embedded with diamonds during the jewellery exhibition in Hotel Marriot on Saturday night. The incident was captured on CCTV and the police are trying to identify the woman.

According to the police, Yash Gang, a resident of Ratlam lodged a complaint he had come to the city for the exhibition in the hotel during which he found that the two rings were missing from his counter. Gang is employed with DC Jewellers in Ratlam.

He searched for the diamond rings everywhere and said that on examining the CCTV footage he found that a woman had managed to steal the rings during the exhibition around 10 pm on Saturday.

The woman was wearing a mask so her face was not visible in the footage. The complainant has given the CCTV to the police for the identification of the woman. A case has been registered against the woman and an investigation has been started. The CCTVs installed at the entrance of the hotel are also being examined by the police to identify the woman. 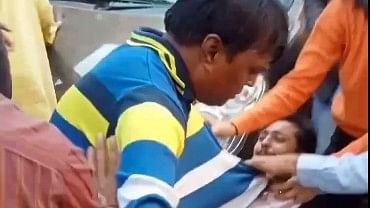