Incident after incident; growing rage of rowdies a matter of concern

Indore (Madhya Pradesh): After Monday’s incident where a cop was taken for a four-km bonnet ride by the ‘rogue’ driver, the cops are on an alert mode. However, the men in uniform were shocked again when two similar incidents took place in the city albeit in different areas. These incidents reveal the daring attitude of lawbreakers.

Speaking to Free Press, head constable, Shiv Singh Chouhan, who had put up a brave front and had clung on to the bonnet of the racing car, said come what, he had decided not to give up without a fight. However, the Lasudia Police did not register a case under the sections of attempt to murder against the violator as he tried to put the life of head constable in danger by not stopping his vehicle. Singh was clinging on to the bonnet of the car even as the vehicle had traversed about four kilometres.

Explaining his condition, Singh told this correspondent that the driver had made several attempts to throw him off the bonnet and had roughly applied brakes, but a determined head constable Singh did not give up. The driver had also stepped on gas while he jumped over the speed breakers. Singh had risked his life and at the end, the law caught up with the “rogue” driver.

In another incident, under the jurisdiction of Central Kotwali police station on Monday night, when policeman Subedar Singh and another officer reached near the Premsukh Talkies, a man named Bunty had a showdown with the cops and in the altercation, the man pushed the cop and he fell on the road. Later, Bunty had even threatened the cops. 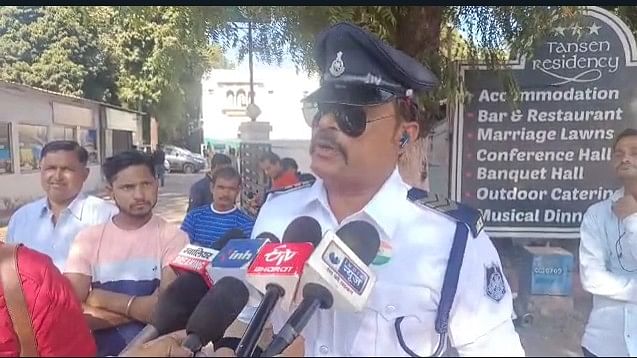