NSUI activists staging demonstration on the RNT Marg campus of the DAVV on Wednesday. | FP
Advertisement

Indore: Devi Ahilya Vishwavidyalaya (DAVV), on Monday, postponed all the examinations scheduled in the offline mode in the months of December and January following a protest by NSUI activists who were demanding a change in the mode of examinations.

On Wednesday, activists of the NSUI, led by Vikas Nandwana, Yash Yadav and Amit Thakur, staged a demonstration on the RNT Marg campus of the DAVV pressing for their demand of a change in the mode of the examinations.

Yash said that classes were conducted online, so the examinations should also be held in the online mode. They staged a sit-in outside the V-C’s chamber so as not to let officials inside until the mode of the examinations was changed.

The “DHE has already instructed us to hold examinations in the offline mode, so we can’t change the mode of examinations from offline to online,” the rector told the protesting NSUI activists, but they were not ready to buy any argument.

For nearly three hours, the protest continued. At 4 pm, the university announced suspension of all examinations scheduled for the months of December and January. In a notification issued on Wednesday evening, DAVV said that the examinations had been suspended for unforeseen reasons.

NSUI activists protesting against conduct of examinations in offline mode said the Covid-19 threat was still there, so exams should be held in online mode

The activists, who were giving this argument, were, themselves, not wearing masks and did not even maintain social distancing during the protest staged 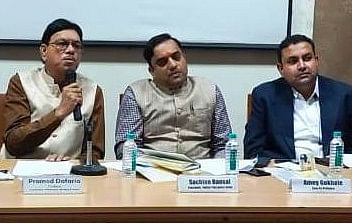