Guna (Madhya Pradesh): After finding itself into controversy, the management of Guna-based Christ Senior Secondary School to avoid any further dispute freed about 16K square feet of government land present inside its campus. The school management itself also got the wire fencing done around the land.

School principal, Thomas Kolapillai confirmed that the wire fencing has been done all around the government land that came out after a revenue check. The school management has got this work done at its own expense as we do not want any further controversy in this matter.

On the other hand, Guna urban tehsildar Siddharth Bhushan informed that whatever government land was in the school premises, it has been freed. A detailed report in this regard will be released.

Earlier, the school situated in the Chodhran Colony featured in the news after two teachers - Justin and Jasmeena Khatun punished a student as he raised the slogan 'Bharat Mata Ki Jai' after the school assembly on November 2. After the incident, an FIR had been registered into the matter.

Following this, many of the parents and members of social outfits gathered outside the school on Friday and recited Hanuman Chalisa to protest against the punishment meted out by school teachers.

Guna municipality also slapped a recovery notice of property tax worth Rs 89 lakh. One former MLA from Guna also raised the issue of government land on the school campus and demanded the revenue department take cognizance of the matter.

When the revenue staff measured, a total of 0.1990 hectares of government land of Survey No 708 in the premises was detected. The said land is recorded in the government documents as a sports ground.

After the demarcation of the said land, action was to be taken to free it from possession. Regarding this, the revenue staff of the urban tehsildar got the demarcation done for the whole day on Monday evening and Tuesday. The Christ School management got wire fencing done around the government land at its own expense.

According to information available from the tehsildar's office, when the settlement was done in the last decade, the land was registered as a graveyard. Here the ‘Samadhis’ of the Gosain society must have been built because there is no custom of cremation in this society. After this, in 1993-94, the then-collector got this land surveyed. In this, in the report given by the Patwaris, it was said that there are no “Samadhis” on the ground. Then this place was registered as a sports ground, although even then it remained a government land. 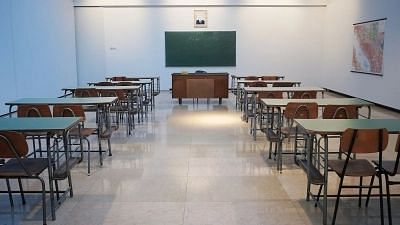