HomeIndiaYogendra Yadav detained during CAA protest in Delhi, calls it an 'honour'

Yogendra Yadav detained during CAA protest in Delhi, calls it an 'honour'

National President of Swaraj India and activist Yogendra Yadav was on Thursday detained by the Delhi Police near the Red Fort during anti-CAA protest march.

"I have just been detained from Lal Qila. About a thousand protesters already detained. Thousands on the way. Am told we are being taken to Bawana," Yadav tweeted.

In another post, he added that it was "an honour to be detained on 19th of December, a small tribute to Ashfakulla Khan and Ramprasad Bismil".

"Happy to be in the company of Dr Dharamvir Gandhi, ex-MP, Patiala," he added.

It is an honour to be detained on 19th of December, a small tribute to Ashfakulla Khan and Ramprasad Bismil.
Happy to be in the company of Dr Dharamvir Gandhi, ex-MP, Patiala pic.twitter.com/odFCzMJQNf

"I know many of our mates are being detained, despite that many have gathered here. The citizenship of this country cannot be divided and this is our protest call today," the Swarajya Abhiyan chief told PTI.

Scores of protesters, including historian Ramachandra Guha, were detained by the Delhi Police near Red Fort when they tried to take out a march in defiance of the prohibitory orders imposed there to protest the Citizenship (Amendment) Act. 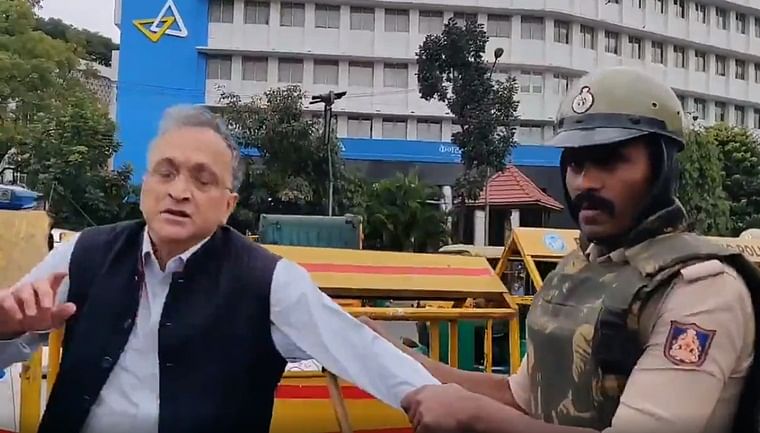 Two protests are scheduled in the national capital, one by students and activists and the other by left parties. The two marches are to meet at Shaheen Park near ITO.

Many people took to Twitter to criticise the arrests.

How many people will your jails hold? As Gandhiji said, once people lose the fear of being detained, they are free. Then the oppressors have lost. That is what is happening with the CAA protests https://t.co/XRATgGuKCm

The crackdown on #CAA_NRC peaceful protests whether its students whose phones are being snatched in Bangalore, detaining @Ram_Guha or @_YogendraYadav calls out the lie that crackdown is because of violence.. There were no stones, arson here. On what grounds can you stop this

Yogendra Yadav detained by Delhi police before the citizens protest march by #HumBharatKeLog. Peaceful protestors are being detained in a bid to not allow the march from Lal Quila to Shahid Park.

Bravo sir... Keep on speaking your mind and raising your voice...🙏