HomeIndiaWatch Video: Who was Cyrus Mistry? Know all about former Tata Sons head who died in accident in Palghar

Watch Video: Who was Cyrus Mistry? Know all about former Tata Sons head who died in accident in Palghar

Mistry was returning to Mumbai from Gujarat in his car and the deadly accident took place after his car hit a divider.

Cyrus Mistry, scion of Mumbai's wealthy Shapoorji Pallonji family, rose to become chairman of the Tata conglomerate in 2012 aged 44, but did not last long in the post. On Sunday, he met a premature end in a car accident about 130km from Mumbai.

Mistry, who was the sixth chairman of Tata Sons, succeeding Ratan Tata, was unceremoniously sacked in October 2016 following disagreements over running the conglomerate.

However, during his four-year tenure, the shortest of any Tata Sons chairman, Mistry brought in 'reformatory' changes, probed past 'mistakes', revoked several 'wrong' decisions, and tried to protect minority shareholders' interests at the country's most diversified business group.

Mistry was the younger son of the late Pallonji Mistry who died in June this year aged 93. Pallonji Mistry was a long-serving head of the Shapoorji Pallonji Group, a diversified conglomerate that began as a construction company started by his father in the early 20th century. Cyrus Mistry took over as managing director at the family business in 1994 and steered it to a global infrastructure group with a turnover of over $1.5 billion from the $20 million construction firm it used to be.

Born in 1968, Cyrus Mistry studied civil engineering at Imperial College, London, and then acquired a master's degree in management from London Business School. He entered the family business in 1991, becoming director of Shapoorji Pallonji & Co Ltd.

He took his father's place on the board of Tata Sons after the latter’s retirement in 2006. He also became director of several Tata companies, apart from handling his responsibilities with the Shapoorji Pallonji Group.

He became deputy chairman of Tata Sons in 2011, to be groomed for the top post, taking over as chairman on Ratan Tata's retirement in 2012. Mistry was also the first and so far only non-Indian to lead the Tata Group, as he held an Irish passport, like his father.

Cyrus Mistry had challenged his removal as Tata Sons chairman, accusing the board of mismanagement and of oppressing minority shareholders.

However, earlier this year, the Supreme Court upheld his dismissal, rejecting all his petitions by reversing its own earlier ruling that favoured the NCLAT order in 2021. 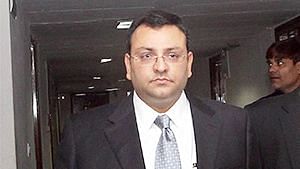