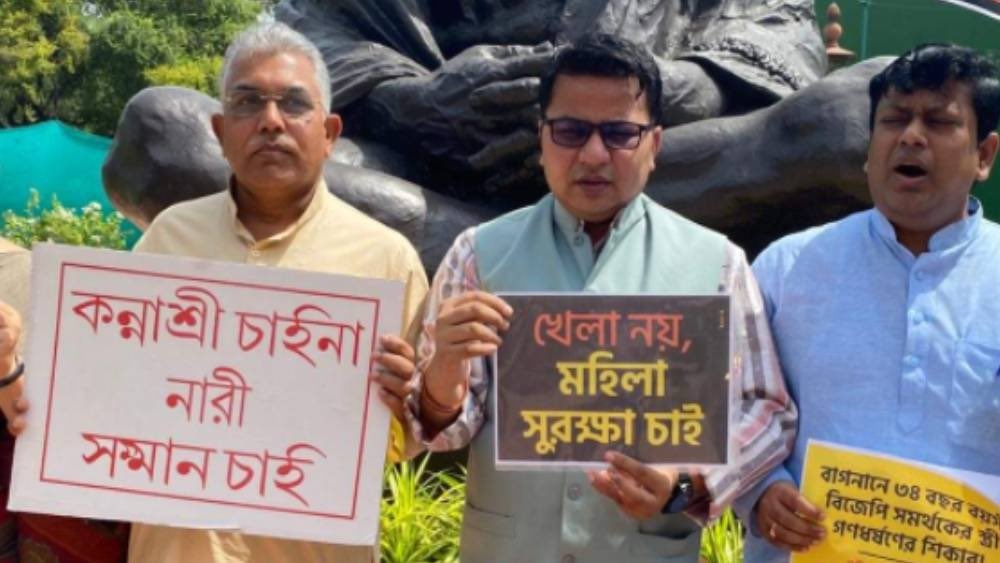 Kolkata: Infighting between the West Bengal Bharatiya Janata Party (BJP) was once again seen as a day after the West Bengal BJP chief Dilip Ghosh protested over the gangrape issue of BJP worker’s wife with a placard where the spelling in Bengali was wrong. Former Tripura governor and senior BJP leader Tathagata Roy on Thursday took to Twitter post the pic of Ghosh holding the placard with spelling error and slammed the one who had printed it with verses of Ishwarchandra Vidyasagar.

Notably, after the poll debacle of the saffron camp Tathagata had slammed Ghosh and said he is also responsible for the debacle.

TMC spokesperson and state general secretary Kunal Ghosh also slammed the infighting in the BJP and said that the fight amongst the saffron camp is always on.

However, refusing to give much importance to the spelling issue, Dilip Ghosh sarcastically said that it was done intentionally to hit the headlines.

“When everyone is standing on dry land, Mamata Banerjee purposely stands on water-logging water in Ghatal to be in the news. Our placards were done just like that purposely,” said Dilip.

Poll analyst Biswanath Chakraborty said that it was Ghosh’s responsibility to read the placard before displaying it.