BJP MLAs protest and march to the Raj Bhavan against the comments by Trinamool minister Akhil Giri on the President of India.

Kolkata: Amidst widespread protest by the BJP and different tribal communities over TMC minister Akhil Giri’s "look" comment about the president, Chief Minister Mamata Banerjee on Monday apologised for the comment and said that she has high "respect" for President Droupadi Murmu.

"We respect the President of India." She is a highly respected lady. We condemn the statement made by Akhil Giri. What he said is wrong. The party has already condemned the statement, and Akhil Giri has also been cautioned. As a matter of fact, I personally respect President Droupadi Murmu. She is a very sweet lady, and I like her a lot. I apologise for Akhil Giri’s statement. "We have great respect for the President, and making such comments is not part of the Trinamool Congress’ culture," said Mamata.

The soul should be "beautiful"

The Chief Minister further said that the soul should be "beautiful."

"I believe people should not focus on the beauty of one’s skin." Beauty is not skin deep; your soul should be fair. "BJP thinks with a one-track mind; they are busy defaming Bengal," further added the Chief Minister.

without naming anyone Mamata also slammed the BJP for allegedly demeaning a tribal minister from Bengal, Birbaha Hansda.

"Birbaha Hansda is a tribal woman who comes from a family of culture." If someone says that Birbaha should stay beneath his shoe, then I feel ashamed. "Is this how someone should speak about a woman?" questioned Mamata.

Meanwhile, a BJP delegation with posters of the president and the national flag in hand visited the governor’s house, demanding the immediate "sacking" of Akhil Giri.

Speaking to the media, Leader of Opposition Suvendu Adhikari said that since the Chief Minister didn’t take any step against Giri, they had visited the Governor’s House.

"Be it from Imphal, Chennai, or Delhi, and through whichever mode, the Governor should ask Chief Minister Mamata Banerjee to immediately sack Giri from the ministerial post." "If Giri is not sacked, then in the next session in the Assembly, the BJP MLAs adhering to all protocols will agitate inside the House," mentioned Adhikari.

TMC national spokesperson Saket Gokhale says Akhil Giri’s comment is irresponsible and does not represent the views of the party.

Read Also
FIR lodged against Akhil Giri in Delhi and West Bengal over comments on the president,... 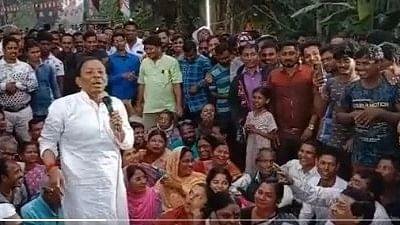