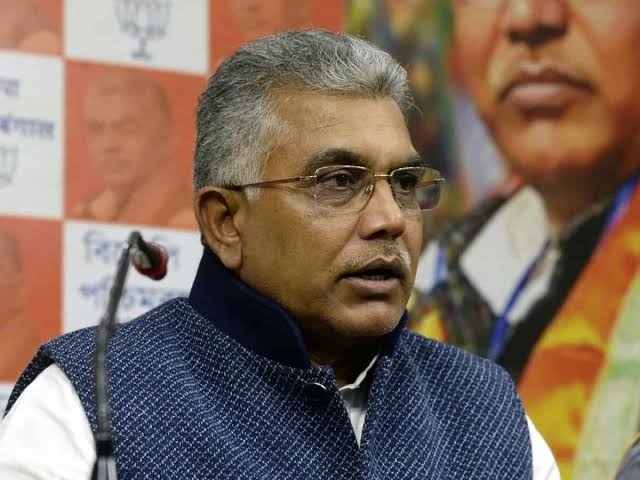 Kolkata: West Bengal BJP chief Dilip Ghosh was on Monday removed from the post. He has now been made the national vice president of the party.

According to BJP sources, the party had done the change as the ruling Trinamool Congress (TMC) is constantly trying to make a dent in North Bengal BJP MPs and MLAs for which the central leaders have made the change and made a North Bengal MP the new party chief.

“There is constantly exodus from the BJP to the TMC and most of the defectors have complained against Dilip Ghosh and held him responsible for the defection for which he was replaced,” said the BJP sources.

The recent defector Babul Supriyo also held Dilip Ghosh responsible for the poll debacle for the BJP in the recently concluded Assembly polls.

Talking to Free Press Journal, the new West Bengal BJP chief Sukanta Majumdar said that he is thankful to the central leadership for making him the new chief and also that he will work hard for Bengal BJP.

Asked how he can stop the defection to which Sukanata said that the main pillars of the saffron camps are the grassroots workers.

“West Bengal will see more than 18 MPs in the 2024 Lok Sabha elections. Those who really follow the principles of BJP will not defect,” said Sukanta.

West Bengal LoP Suvendu Adhikari congratulated Ghosh and Majumdar. He tweeted: "Heartiest congratulations to both Shri @DilipGhoshBJP for being appointed as National Vice President of @BJP4India & Shri @DrSukantaMajum1 for being appointed as President of @BJP4Bengal. I wish them very best & believe that both would give their best to strengthen the Party."

According to BJP youth wing leader Keya Ghosh, Dilip Ghosh has been changed as his term was renewed due to the Assembly poll and also that the change was ought to happen.

According to poll analyst Mainak Pututundu, by replacing Ghosh, the BJP is trying to give an ‘image makeover’ to the party.

“The BJP is trying to bring a new face and also the saffron camp is trying to give importance to North Bengal,” said Mainak.