Large-scale violence was reported from at least 17 districts on Saturday while voting for the 476 posts of block panchayat chiefs was underway in Uttar Pradesh.

Majority of the incidents took place in Chandauli, Amroha, Hamirpur, and many other districts where the counting of votes in underway.

Police reportedly had to use baton charge to disperse the crowd. Many videos circulating across social media suggest that workers carrying sticks were beating up opposition party workers on the election day. In one such video, it can be seen that the police tries to stop the BJP workers carrying sticks in their hands but the crowd remains out of control.

Few days ago, a video of a woman, who was reportedly a proposer for the SP candidate, being harassed and her saree being pulled by BJP workers in Lakhimpur Kheri had gone viral on social media following which a complaint was registered by the police. The woman had gone to file her nomination papers at the block office.

Earlier today, Uttar Pradesh Chief Minister Yogi Adityanath directed officials that tight security arrangements should be made at each block where counting is taking place.

In a statement issued, Adityanath said there should be a system in place wherein the winning and losing candidates be escorted to their homes under police protection.

"The police force should remain extra alert and sensitive. Stringent action should be initiated against people who indulge in vitiating the atmosphere," he said.

UP’s panchayat polls, which are not contested on political lines, are usually ignored by parties. This time, ahead of next year’s Assembly elections, the stakes have suddenly become high.

A total of 349 candidates for the block panchayat chief posts were elected unopposed on Friday, the last day for the withdrawal of nomination papers.

Following the filing of nominations on Friday, the BJP claimed that of the total 825, 290 candidates supported by the party had already won unopposed, as no one filed nominations against them. According to information shared by the UP State Election Commission on Friday evening, a total of 349 candidates have been elected unopposed, 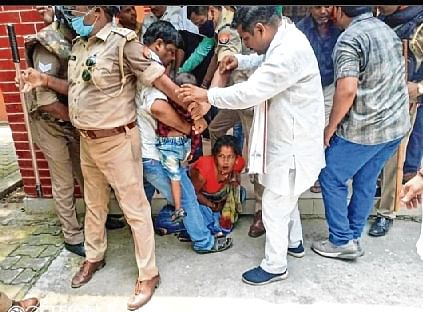