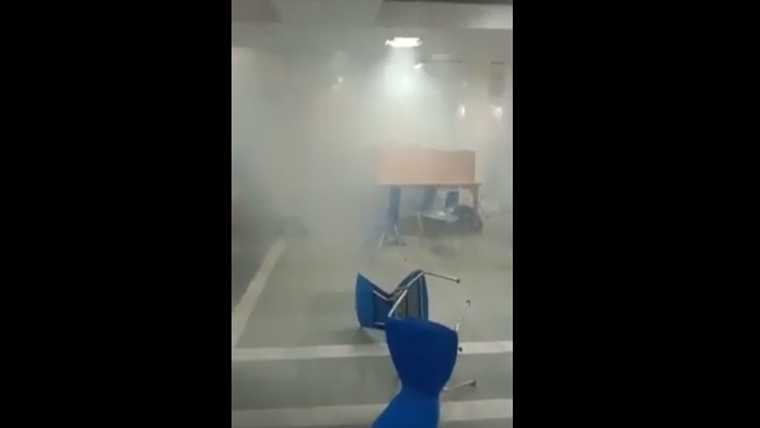 The famed Jamia Milia University in Delhi witnessed a widespread protest with students taking to the streets with posters criticising the Citizenship Amendment Act on Sunday. The clash between the police and protestors resulted in several injured students and police officers. The students claimed that "certain" local elements had "disrupted" their protest and indulged in violence.

Among the hundreds of disturbing pictures and videos being passed online of the protests, one video has people shrinking their eyes. In the video shared by NDTV, students of the Jamia University can be seen hastily trying to find a safe space in the college’s library loud firing and shattering sounds can be heard.

The Delhi police had resorted to using tear gas shells and opened lathi-charge on the students. In the video posted online, students can be seen covering their mouths to avoid the tear gas entering their bodies. One student can be heard saying, "Please switch on the fan."

The video shows students requesting each other to be calm and not panic, to which one student can be heard replying, "They are beating us mercilessly."

A college official told NDTV that he was present in the library when the police shot two to three tear gas shells at the students.

The police had entered the university without permission and detained almost 100 students. RThe students were later released by the police after the rest of the students staged another protest outside the Delhi police headquarters.

Many educational institutions across India today protested against the ill-treatment of Jamia students. Students and people gathered today at Madras University, Indian Institute of Science, Bangalore adn Kalina University, Mumbai to stand in solidaity with Jamia students and protests against CAA and NRC.

Advocate Indira Jaisingh said on Twitter that the Supreme Court lawyers will also gather outside the court today to around 9.45 a.m to discuss the next course of legal action to defend the students “whose life and liberty has been put in danger by the police.”