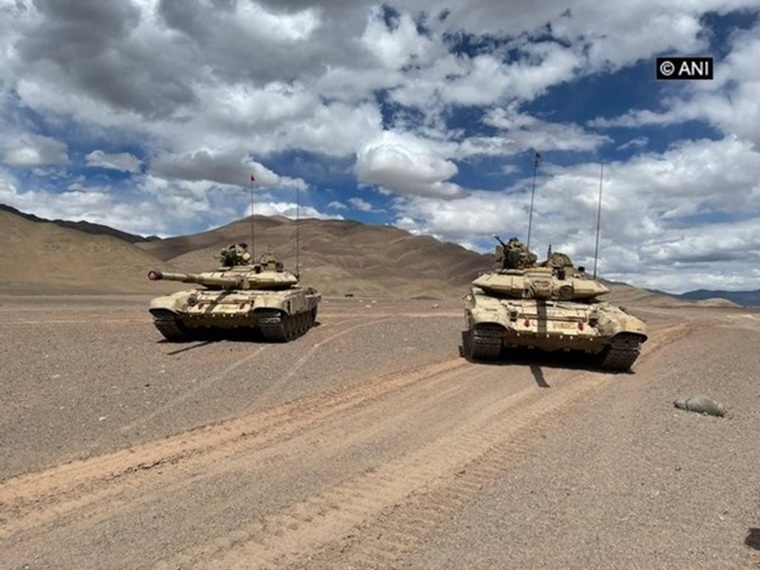 The Indian Army has deployed T-90s and T-72s for high altitude operations in significant numbers.

Videos of tank manoeuvres carried out by a T-90 Bhishma tank regiment while practicing attack operations in high-altitude areas at a location barely 40 km from the China border was shared by ANI.

Following the border standoff with China, the Indian Army deployed its armoured regiments have evolved their standard operating procedures to use their machines more effectively at altitudes ranging from 14,000 feet to 17,000 feet in the area.

"We have already spent a year in the Eastern Ladakh at these heights experiencing temperatures up to -45 degrees. We have evolved our SOPs to operate the tanks in these temperatures and harsh terrain," an Army official told ANI.

Despite the disengagement at few locations like Pangong lake and Gogra heights, both sides continue to maintain troops in large numbers along the Line of Actual Control.

The Indian Army has also continued to strengthen its operations in these areas with tanks and ICVs to tackle any threat or challenge at these heights.

The Indian Army has created a huge infrastructure last year for supporting its tank operations including tank shelters which help in avoiding parking the machines in open during winters.

"The stress is now on maintenance of these tanks as extreme winters can have an impact on the rubber and other parts. If we can maintain these tanks well, we can use them here for very long," Army officials told ANI.

After nearly 15 months of a face-off, the Indian and Chinese armies have completed the disengagement process and restored the pre-standoff ground position in Gogra in eastern Ladakh, in a significant forward movement towards restoration of peace and tranquillity in the region.

Announcing the development, the Indian Army said on Friday that the disengagement process was carried out on August 4 and 5 and all temporary structures as well as other allied infrastructure created by both sides have been dismantled and mutually verified subsequently.

The disengagement in the area around Gogra or Patrolling Point-17A (PP-17A) came over five months after the two sides withdrew their troops and weapons from the North and South banks of Pangong Lake areas.

The Army said the disengagement process at PP-17A was carried out in line with the outcome of the 12th round of military talks that had taken place on July 31 at Chushul-Moldo meeting point in eastern Ladakh.