After Bandra and Surat, huge crowd gathers in Murshidabad in Bengal demanding transport to go home 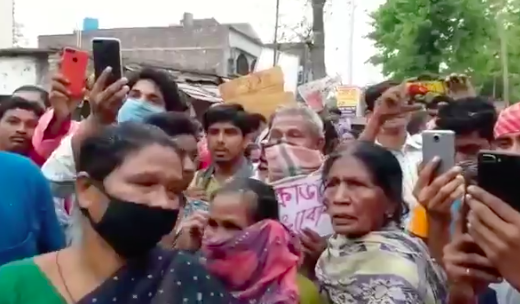 Three cities have witnessed crowds gathering on April 14, the day Prime Minister Narendra Modi announced the lockdown will be extended till May 3. Mumbai in Maharashtra, Surat in Gujarat, and Murshidabad in West Bengal.

These video images come from Domkal area of Murshidabad where hundreds of labourers came in large numbers to demand food items, as they have been stuck for 25 days. “No arrangement has been made for us,” one of the labourers alleged.

From the video, it's a large gathering with some individuals not bothering about wearing masks.

Earlier on Tuesday, hours after Prime Minister Narendra Modi addressed the nation and extended the country-wide lockdown till May 3, a crowd of well over a thousand migrant workers gathered at a bus depot near Bandra railway station on Tuesday afternoon in Bandra (West), violating the norms of the lockdown and demanding that transportation arrangements be made to allow them to return to their hometowns and native places.

The angry and frustrated crowd was, however, dispersed two and a half hours later, after police intervened and resorted to lathi charge.

A source from the area said a truck was brought near Bandra railway station to distribute food packets and essential food grains to the needy, with police permission. However, things soon went out of control when over 700 people turned up.

They were mostly from the nearby Patel Nagar area, where a large number of migrant labourers stay on rent. What added fuel to the fire was a rumour about long-distance trains being run, which attracted another 1000-plus people, mostly migrant workers.

After the Bandra incident, it was also reported that hundreds of migrant workers gathered in Varachha area of Surat on Tuesday evening, demanding that they be sent to their native places despite lockdown.

Varachha is the diamond polishing hub of Surat, giving employment to lakhs of workers from different parts of Gujarat and the country. Many textile units are also located here.

"These migrant workers want to go to their native places. We have asked them not to be impatient because a lockdown is in force at present.

"Since some of them were complaining about food, we have called an NGO and immediately brought food packets for them. The situation is now under control," a police officer at the spot told reporters.