A flag march was conducted by police and Rapid Action Force amid Section 144 imposed in Karnataka's Shivamogga after a group of Tipu Sultan followers tried to remove banners of VD Savarkar to install Tipu Sultan's banners in the Ameer Ahmad circle of the city yesterday.

The arrests were made by the Halasuru Gate police station in Bengaluru where a case was filed on August 14 under the Prevention of Insult to National Honour Act, 1971, and outraging of religious feelings (under Section 295A of the Indian Penal Code or IPC) over the alleged vandalism of a flex board image of Tipu Sultan put up at Nripatunga Road in Hudson Circle installed as part of the Congress 'Freedom Walk' program on August 15.

Those arrested include Puneeth Kerehalli, president of an organization named Rastra Rakshana Pade, for allegedly tearing up the Tipu Sultan flex.

Karnataka Pradesh Congress Chief DK Shivakumar visited the incident site and said, "Someone is trying to create disturbance in the state. They are not able to digest Congress' 'Freedom March'".

Meanwhile, Chief Minister Basavaraj Bommai said he has given direction to initiate action as per law against those who disturbed peace in the city.

Shivamogga MLA and former minister K S Eshwarappa blamed the Congress for the clashes in the town.

Besides, security has been heightened in Udupi in the wake of tension in Shivamogga.

The police have deployed a tight security cover near the Brahmagiri circle in Udupi city where a banner of Savarkar has been displayed as part of the 75th anniversary of independence. 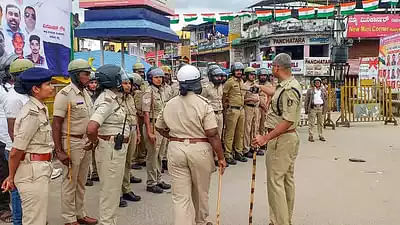