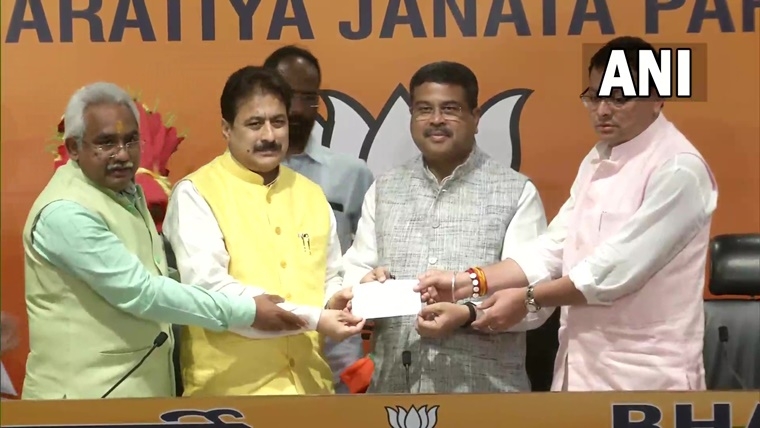 Congress MLA Rajkumar, a Dalit leader who represents the Purola constituency in the Uttarakhand assembly, joined the BJP on Sunday. The BJP asserted that this is a big indication of its victory in the coming polls in the state.

While joining the BJP in the presence of Union minister Dharmendra Pradhan, Chief Minister Pushkar Singh Dhami, state party president Madan Kaushik and Rajya Sabha MP from the state Anil Baluni, Rajkumar lauded the BJP governments at the Centre and in Uttarakhand for ushering in infrastructure development like all-weather roads.

He also heaped praise on Prime Minister Narendra Modi, and claimed that while the Congress made Dalits dependent on doles the BJP has worked to make them self-reliant.

Rajkumar, who was in the BJP earlier too, praised the Modi government for providing free grains to the poor following the COVID-19 outbreak and taking other welfare measures.

"The BJP is working towards making people from the lower castes independent, while Congress has made these people dependent on subsidies since Independence. I've joined the party today after seeing BJP's great work in Uttarakhand," MLA Rajkumar was quoted as saying by ANI.

Meanwhile, Dharmendra Pradhan praised Rajkumar as a people's leader, and said his joining the BJP is a big indication of the party's win in the polls. Under Modi and Dhami, the BJP will win and the state will have a "double-engine" government, he said.

Recently, independent MLA Pritam Singh Panwar had also joined the BJP as the party boosts its firepower to take on the Congress in the assembly polls in the hilly state, slated for early next year.

Rajkumar was earlier a BJP MLA and had occupied the post of secretary in the party's state unit.

The significance of the joining can be gauged from fact that Uttarakhand chief minister Pushkar Singh Dhami and state unit chief Madan Kaushik both were present to welcome the Congress legislator in the party's fold.

Polls for the 70 member Uttarakhand Assembly are likely to take place in early 2022.