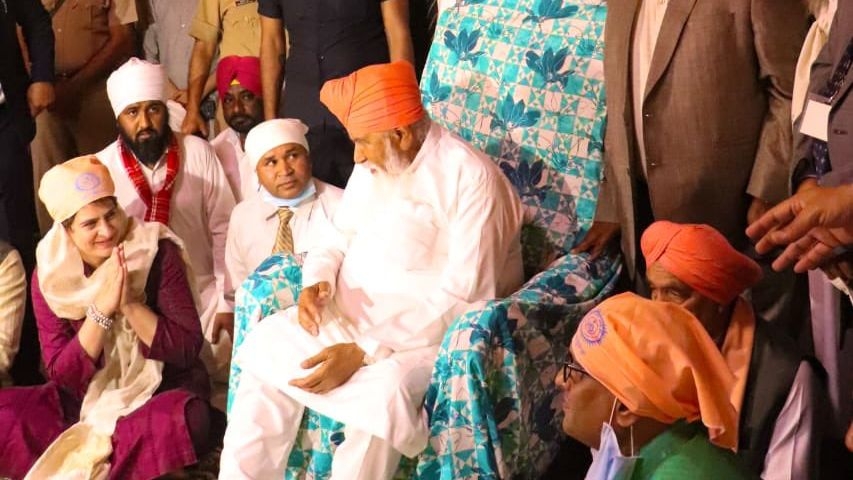 Lucknow: After bowing to Dargah, Temples and taking a holy dip at Sangam, the Congress General Secretary Priyanka Gandhi Vadra participated in a function organized to celebrate 644th Jayanti of Guru Ravidas Maharaj in Varanasi on Saturday in a bid to woo back the party’s traditional Brahmin-Muslim-Dalit vote bank in Uttar Pradesh.

The Congress leader was accorded a warm welcome when she landed at 10.30 am at Varanasi Airport the UPCC Chief Ajay Kumar Lallu, former party MP Rajesh Mishra, ex MLA Ajay Rai etc. Hundreds of Congress workers lined up both sides of the roads to greet their leader. Priyanka waved at them and her cavalcade drove straight to Guru Ravidas Maharaj birthplace, known as Seergovardhanpur at Begampura in Varanasi

Before Priyanka, the Union Petroleum, Oil and Natural Gas Minister Dharmendra Pradhan paid obeisance at the temple and sought blessings from Sant Niranjan Das on Saturday. Representing the PM, he told the temple, Chief Priest, that the Central government was planning to renovate and develop the existing temple to give it a grand look.

The Samajwadi Party chief Akhilesh Yadav is also expected to participate in the celebrations for the first time. The BSP chief Mayawati tweeted to pay obeisance to the great saint. She also congratulated his followers on the occasion and advised Central and State governments to follow the path shown by Saint Ravidas for the welfare of people. Guru Ravidas Jayanti 2021: Date, time, significance, and all you need to know