With less than 24 hours to go for the results, FPJ presents a graphic detail of Ground Zero

Assembly elections rarely decide India’s future but the outcome in Uttar Pradesh is bound to have dramatic consequences for national politics.

The long-drawn seven-phase polling has finally come to an end and the importance of people’s verdict cannot be overstated, given the volatile circumstances caused by the worst global pandemic, and the consequent economic downturn, have created.

While opinion polls have suggested a clear edge to the BJP, ground realities manifest something entirely different. The BJP has faced stiff resistance across the state, even violent reprisal at many places, indicating a far closer contest than widely anticipated. An upset cannot be ruled out before the people’s verdict is finally out on March 10.

In light of that, let's take a look at some of the seats that matter in Uttar Pradesh.

Zahoorabad: Two main allies of Samajwadi Party in this election are RLD (in the west) and SBSP in the east. SBSP chief contested the previous election as a BJP ally but this time he is in alliance with the main opposition Samajwadi Party.

He is pitted against BJP’s Kalicharan Rajbhar who won the seat in 2002 and 2007 on BSP ticket and BSP’s Sayeda Shadab Fatima who was a minister in the Akhilesh Yadav-led SP government. It won’t be wrong to call it a battle of turncoats.

Om Prakash Rajbhar polled 86,583 votes defeating his closest rival Kalicharan (BSP) by a margin of over 18000 votes but then he was in alliance with BJP. SP stood third then.

Gorakhpur Urban: Gorakhpur Urban surely became the hottest seat this election when BJP announced the sitting chief minister as the candidate from this seat. Samajwadi Party, in an attempt to woo Brahmin voters, had fielded Sabhavati Shukla (wife of late Upendra Shukla who contested the Lok Sabha bypoll on BJP ticket in 2018 — the only time that BJP lost this seat since 1989).

SP is also targeting some sympathy votes in the name of Upendra Shukla. Azad Samaj Party’s founder Chandrashekhar Azad Raavan is also contesting for this seat. g BSP, interestingly, has fielded a Muslim candidate Khwaja Shamsuddin against Yogi Adityanath, which is also being seen as an attempt to further polarise the seat and to make it even easier for Yogi as well as the BJP. Since 1989, BJP hasn’t lost this seat except for 2002.

Karhal: Even when SP’s tally reduced to 47 in 2017, Karhal was one of those few seats where the party (Samajwadi Party) won with a big margin of 38,405 votes. Congress and BJP each could taste victory in this seat just once. The seat has remained with the Samajwadi Party for three consecutive terms.

The seat has a sizeable Yadav voters roughly 1.25 lakhs. BJP has fielded union minister SP Singh Baghel to woo 30,000 Baghel voters on the seat apart from Shakya and Kshatriyas who are considerable in numbers and BJP often considers them as its core vote bank.

It would be interesting to see how this constituency, voting for the first time for a chief ministerial candidate, would choose to vote.

BJP’s Vivek Shakya challenging Shivpal Yadav on his traditional seat. Vivek Shakya’s father Manoj Shakya is a wellknown social worker in Jaswantnagar. Though experts believe it would be a huge challenge for him to outseat Shivpal Yadav here.

Kidwai Nagar: The delimitation exercise before 2012 elections led to the formation of Kidwai Nagar assembly segment. The most high profile seat in Kanpur-Kidwai Nagar is currently represented by BJP MLA Mahesh Trivedi. He has been given ticket by BJP again and is pitted against Congress stalwart and 4-term MLA Ajay Kapoor. The contest on this seat, said a local journalist, is completely bipolar. He lost the previous election to BJP’s Mahesh Trivedi by 33,983 votes.

Mau Sadar: Popular Purvanchal don Mukhtar Ansari, currently languishing in Banda jail, is the incumbent MLA from this seat. He hasn’t lost a single election from this seat since 1996. This time it will be his son Abbas Ansari who contested on father’s stronghold on the SBSP symbol as an SP supported candidate. Abbas contested the 2017 election from Ghosi seat but lost to BJP’s Fagu Chauhan by a margin of 7,003 votes. He is pitched against BJP’s Ashok Singh.

Lucknow cantonment: A seat that was in the news for so many top faces of BJP expressing their wish to contest on this party stronghold seat. It included the likes of Aparna Yadav, Mayank Joshi (son of Rita Bahuguna Joshi), Suresh Chandra Tiwari (sitting MLA) but BJP surprised everyone by fielding its Lucknow Central MLA and UP Law minister Brajesh Pathak. Mayank Joshi joined SP in the presence of Akhilesh Yadav during the last phase of campaigning.

Kairana: The seat became interesting ever since the sitting SP MLA Nahid Hasan was sent to jail. His sister Iqra Hasan took the entire campaigning in her own hands. BJP has fielded its former candidate Mriganka Singh again. Even in 2017, when SP was reduced to 47, Nahid Hasan not only won the seat but defeated BJP’s Mriganka Singh by over 20,000 votes. 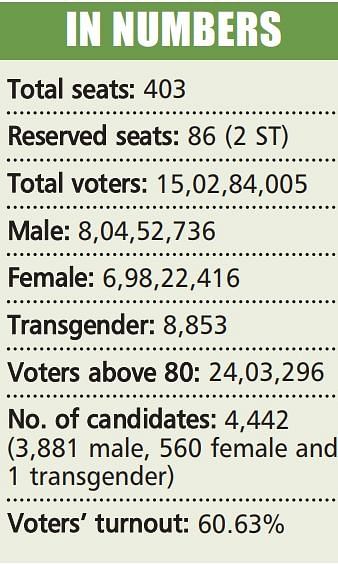