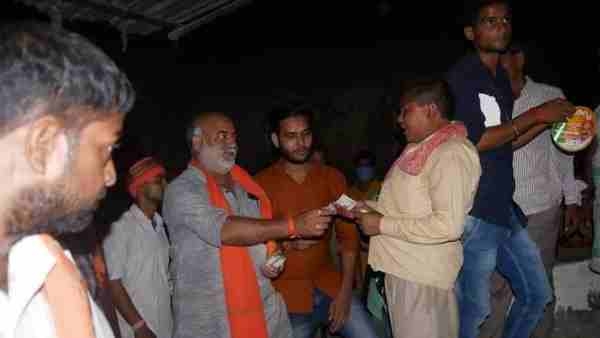 Bhartiya Janata Party (BJP) candidate from Jaunpur’s Malhani constituency, Manoj Singh, was allegedly distributing money when he was on a door-to-door campaign at Parashurampur village ahead of the assembly bypolls on November 3.

A picture of Singh, allegedly handing over cash to woo voters, has gone viral on social media. In the picture, the BJP candidate can be seen holding cash in one hand and giving a five hundred rupee note to a person.

Meanwhile, Samajwadi Party spokesperson Sunil Singh Sajan has asked the Election Commission to "immediately take suo-motu cognizance of the issue" and "cancel the nomination of Manoj Singh". "It seems the BJP is aware that there is resentment in public against them and that's why they want to lure the public by offering money. The BJP is hell bent on misusing the government machinery to win the bypolls," he added.

The Election Commission is yet to take any action against Manoj Singh.

Besides, a total of 88 candidates for seven seats are contesting the Uttar Pradesh assembly bypolls. The seven seats include Naugaon and Ghatampur (Kanpur) which fell vacant after deaths of state ministers Chetan Chauhan and Kamal Rani Varun respectively. Another assembly seat Tundla in Firozabad district fell vacant following the election of sitting MLA S P Singh Baghel to the Lok Sabha.

The BJP has fielded Sangeeta Chauhan from Naugaon after the death of her husband Chetan Chauhan, an international cricketer. The ruling party has also fielded the wife of another deceased MLA, Virendra Singh Sirohi. Usha Sirohi will contest the bypoll in Bulandshahr on a BJP ticket. In Bangarmau, the party has given ticket to Shrikant Katiyar.

Polling will be held on November 3 and the results will be declared seven days later.